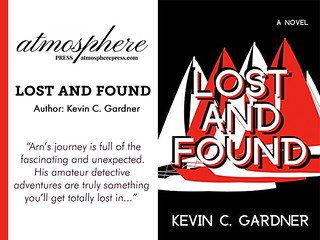 LOSTANDFOUND.KGardner
1 year ago ago by Genesee Community College.

Batavia, New York - Most days, Kevin C. Gardner can be found teaching English Composition in the Orleans County Campus Center of Genesee Community College. But, after class? Gardner lets his own writing consume his attention.

“LOST AND FOUND” which debuted just two months ago, is Gardner’s first venture into the world of fiction. It introduces the story of the once-successful writer, Arn Maxwell. Broke, and divorced, he packs all he owns into his 38-foot sloop and leaves South Florida. Seeing the need to rebuild his life and searching for a change in scenery, he heads to Saunders Point, and Aunt Liz. After a joyful reunion, he learns that she is being conned. Reverend T. Whitman Earle is soliciting funds for a non-existent school in Africa.

Angered by the possibility, Arn decides to investigate. With the help of Kim, the pretty young librarian, and Johnny Good, a childhood friend, he learns of Earle’s shady past. With the local police at his heels, he builds the case that the minister is conning his flock. Then killing them.

“LOST AND FOUND” is available in paperback and Kindle versions through Amazon, Goodreads and at www.kevincgardner.com.

Gardner has lived in Western New York and worked as a carpenter for most of his life. When it came time for a change, he developed his creativity and love of words into a career in teaching and creative writing. He earned a master’s degree from SUNY Brockport. Gardner has three children and two grandchildren and currently lives in Brockport with his wife and stepdaughter. The publication of LOST AND FOUND has earned Gardner a place in GCC’s Recognition Matters series which highlights the accomplishments of the College’s faculty, staff and students.

For more information or photographs contact Vice President, Development and External Affairs Justin Johnston at 585-345-6809, or via email: jmjohnston@genesee.edu.

Editor’s Note: An image of the cover of “LOST AND FOUND” is available at: