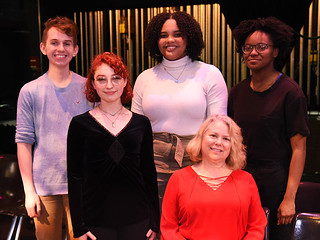 The Forum Players, Genesee Community College’s theatre arts students, and members of the local theatre community are excited to open the 2020 spring season with Doubt: A Parable, written by John Patrick Shanley, which won both a Pulitzer Prize and Tony Award in 2005.

This performance is a brilliant and powerful drama which tells the story of Bronx school principal Sister Aloysius, who takes matters into her own hands when she suspects the young Father Flynn of improper relations with a male student. Shanley not only wrote the play, but he also wrote the screenplay and directed it as a film starring Meryl Streep and Philip Seymour Hoffman.

GCC’s talented Forum Players bring this parable to life with four live performances, directed by Maryanne Arena and Jaime Arena, which are intended for mature audiences.

Tickets for these shows are available online! The cost is $8 for adults, and $5 for seniors (55+) and students (16+) and GCC faculty/ staff. GCC students with ID are $3, and GCC alumni with ID will receive a $2 discount on an adult ticket. To reserve seats, you may also contact the GCC box office at boxoffice@genesee.edu or (585) 345-6814.

A photograph of the cast of Doubt: A Parable is available at:  http://marketing.genesee.edu/images/DoubtCast2020.jpg

Missing from the photo is Alyssa Young.