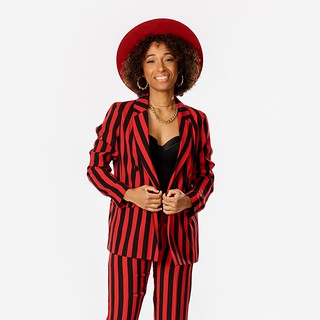 View on Flickr
12 months ago ago by Genesee Community College.

Batavia, NY- “I pick John” she said with a huge smile as she pointed to artist John Legend on Monday night’s episode of NBC’s hit show The Voice.

In August, 32-year-old Samara Brown posted to social media “I auditioned for The Voice!” Since then, the staff and faculty at Genesee Community College in Batavia, New York have been on the edge of their seats waiting to see her performance, which is now available online. Her audition left judges John Legend and Ariana Grande fighting over who would get to be her coach this season.

Samara Brown from Bronx, New York earned a Theatre Arts degree from Genesee Community College (GCC) in 2009. One of the first times western New Yorkers got to see Brown perform on stage, it was as Patient #2 in a production of One Flew Over the Cuckoo’s Nest in October of 2007.

Then, as a freshman, Brown found her home in GCC’s Stuart Steiner Theatre. Flying onto the scene in April of 2008, literally from the ceiling, as Peter Pan in the College’s performance of Peter Pan-The Musical. Her performances continued:

“In my career specifically, you need two things; technique and talent, I think the technique is definitely what GCC gave me,” said Brown in GCC’s Alumni Spotlight Story.

“Samara’s talent was compounded by her drive and her passion performing. She worked hard at rehearsals, she took apart each role she played and fully embraced the character,” said GCC’s Maryanne Arena, Director of the Fine and Performing Arts who directed Brown in numerous shows and one-act performances as well as cabarets. “Samara is a star whether she is on or off the stage.”

GCC's award-winning Theatre Arts program is designed to expose students to the richness of the performing arts and to provide a solid academic foundation for further study and career opportunities in theatre. Graduates typically transfer to a baccalaureate institution as juniors to continue their educations.

GCC students who have transferred and graduated from four-year institutions have been featured in films, started theatre companies, served as artistic directors, interned for regional equity theatres, designed costumes for college and equity theatres, and taught acting at professional theatres to elementary and high school students. Interested individuals are encouraged to contact our Career Center for more information.

A photo of Brown from The Voice is available at: