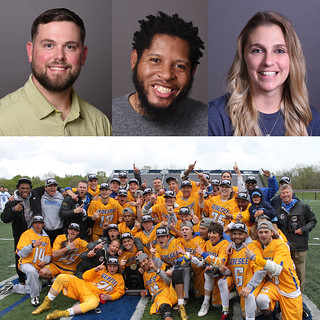 Background: This Saturday, Saturday, September 18, 2019 at 5:00 p.m. Genesee Community College will welcome its 2021 inductees into its Athletic Hall of Fame. This year the College will honor:

Brian Jackson who played on the Men’s Basketball team from 2001-2003, never losing a home game during his tenure. Jackson played on the first team all-region both years, won two district titles, two region titles and made two national tournament appearances. He broke GCC’s record for career assists, had 17.8 points a game, 3.75 rebounds, led the team in assist and steals, and had a 1,138 career-point total. Off the court, Jackson is a Behavioral Specialist at Eugenio Maria de Hostas Charter School and is the head coach of the boys’ varsity basketball team. He also has his own training brand, Jackson Basketball Training. Jackson resides in Rochester, New York.

Jessie Jaszko Rapone, born in 1990 in Batavia, NY, Jessie is the daughter of Diane Donohue and the late Joseph Jaszko and has one brother, Joey Jaszko. She graduated from Batavia High School in 2008 where she played varsity soccer player. She attended GCC and played soccer until graduation in 2011, and went to work as a Medical Administrative Assistant. Her career has taken her to Three Little Birds Pediatrics in Batavia, NY. In 2015 Jessie married Mikey Rapone and they have two children. They reside in Batavia where she coaches Notre Dame High School’s girls’ varsity soccer team. She continues to play soccer all year long and shares her love of the game with her children.

Chris Page played baseball for the GCC Cougars from 2007-2009. As a freshman Page was selected Third Team All- American. In his sophomore season he led the Cougars with 52 hits, 4 Home Runs and 34 RBIs. In 2009 Page set the single season school record with 34 RBIs, 34 walks and 18 doubles. He was selected GCC’s male athlete of the year, in addition to being named 2nd team All-American and 1st team All-Region. Page was ranked 22nd in the nation with a batting average of .456. To conclude his final season with GCC he was drafted by the Cincinnati Reds and was the first GCC athlete in baseball to achieve this honor. Page continued his baseball career at Embry Riddle, where he was a two-time first team all-conference selection.

Last, but certainly not least, the entire 2016 Men’s Lacrosse Team is being inducted for their outstanding season and Genesee Community College’s first ever National Lacrosse Championship title. The team ranked #4 from the start of the pre-season to the last poll before playoffs began. During the regular season they lost only to the three top teams in the country - Onondaga Community College, Nassau Community College and CC-Broome County-Essex in overtime. Genesee beat every other team in the league by 10 or more goals. In the regional playoffs GCC dominated, automatically qualifying for the National Tournament. GCC hosted Howard CC in the first round and won, putting GCC in the National semi-final game against Nassau, the then #1 seed. In the semi-final game GCC was winning at half time, tied at the end of the third quarter and with five seconds left in the game, GCC earned a spot in their first ever National Championship Game. The National Championship game was the third time facing off against Onondaga CC. In overtime GCC came up with huge saves and caused turnovers and in the end, scored the most important goal in the history of GCC’s lacrosse program, for the school’s first National Lacrosse Championship.

The community is invited to join the Athletic Department and Alumni Affairs Office in welcoming these deserving individuals and team members into Genesee Community College’s Athletic Hall of Fame.

An image of the 2021 inductees is available at: https://marketing.genesee.edu/images/AthleticHoF2021.jpg