GCC’s Alumni Hall of Fame Makes Up for Lost Time 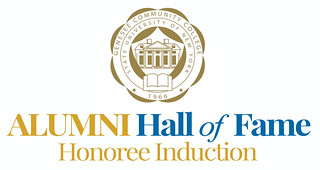 AlumniHallofFame
4 years ago ago by Genesee Community College. 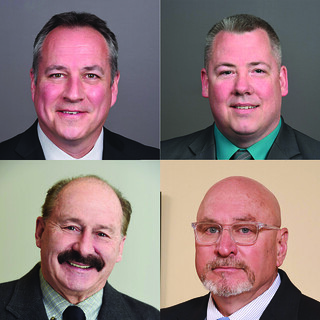 AlumniHofFinductees20-21
1 year ago ago by Genesee Community College.

Batavia, New York - The Genesee Community College Foundation will proudly induct both the 2020 and 2021 honorees into its Alumni Hall of Fame in Batavia on Thursday, September 16, 2021 at 4 p.m. after missing last year’s ceremony due to the COVID-19 pandemic.

Eager to honor the work done by these four individuals, GCC will induct Timothy S. Whitcomb, Jim H. Tuttle, David M. DiMatteo and Robert W. Hirsch into its Alumni Hall of Fame, forever marking their contributions to their communities and the pride they have brought to Genesee Community College.

Timothy Whitcomb, GCC class of 1989, is the Sheriff for Cattaraugus County in Western New York and has served in this role for 30 years. Sheriff Whitcomb is also a Board Member and PTP Director for Law Enforcement Operations at TTMPT (Talk to Me Post Tour); an independent not-for-profit group of committed and concerned retired police officers and police professionals, and actively speaks nationwide as on posttraumatic stress disorder (PTSD).

Sheriff Whitcomb earned a master’s degree in Counseling Education from St. Bonaventure University and is a certified police instructor in the areas of Interview and Interrogation, the Investigation of Sex Crimes, and the Law Enforcement Response to School Violence. Sheriff Whitcomb is a graduate of the 206th Session of the Federal Bureau Investigation’s National Academy. He has also recently been certified as a SWAT Team fitness specialist.

Sheriff Whitcomb has been an adjunct professor for both St. Bonaventure University and Jamestown Community College. He has served as President for the New York State Sheriffs’ Association and is a past President of the State of New York Police Juvenile Officer Association.

Jim Tuttle, GCC classes of 1971 and 1982 graduated from Genesee Community College with his AAS degree in Criminal Justice and enlisted in the United States Army. Mr. Tuttle re-enlisted in the Army Reserves several times continuing to serve the United States of America for a total of 21 years and eventually returned to earn an Associate degree in Business Administration in 1982 and later to serve on the Alumni Council.

Mr. Tuttle continued his education and earned a bachelor’s degree in Hazardous Studies from SUNY Empire State College. He served as a police officer for the City of Batavia for thirty years, retiring as a Lieutenant.

Mr. Tuttle met his wife while working as an EMT at St. Jerome Hospital in Batavia.

Mr. Tuttle has demonstrated his compassion for others and the community by serving four years as a Town of Pembroke Supervisor, GCC Alumni Council member, GCC Alumni Homecoming Committee, GCC’s Cougar Classic Golf Committee and on the Advisory Board for Genesee County Stop DWI.

David DiMatteo, GCC class of 1984, has been a practicing attorney in the region for over 32 years. A 1982 Notre Dame high school graduate, he began his college education pursuits at Genesee Community College, graduating GCC in 1984, he continued his education at Le Moyne College, graduating Magna Cum Laude with a bachelor’s degree in Sociology then completing his legal studies at the University of Buffalo Law School in 1989. Upon graduating he took a position in Warsaw, NY where he found his own general law private practice in 1993.  He works with municipalities in Erie, Genesee, Livingston and Wyoming counties addressing siting or prohibiting siting of windmills and a variety of solar projects, writing and adapting local law, and creating and financing water districts. He has worked with the NY State Senate to facilitate legislation for local communities.

Mr. DiMatteo has a farm in Wyoming County where he raises Black Angus cows and horses. He also enjoys hunting locally as well as in Africa, Alaska and the Arctic Circle. Mr. DiMatteo and his wife enjoy their farm with their three children and their new granddaughter.

Mr. Hirsch began his career at Warsaw Central School (WCSD) where he taught history and coached the wrestling team for over a decade. The wrestling program he built there included eight LCAA titles, seven Section V championships, over 50 sectional champions, eight individual state champions, and a team NYS title in 2007. Beyond the wrestling mat, Mr. Hirsch encouraged his wrestlers to be involved in community service; he himself served a total of 18 years as the Director of Recreation for the towns of Freedom and Arcade where he organizes the annual Summer Olympics for children.

Mr. Hirsch also coached the NYS Women’s Wrestling National Team which earned Mr. Hirsch the title of 2014 Wrestling Coach of the Year by USA Wrestling.  Mr. Hirsch went on to coach the Alfred State wrestling team to win the Northeast Championship and placed second two other times. Coaching four NCWA All-Americans, one National Champion and MVP of the tournament, including an eleventh-place team finish, Mr. Hirsch lead the Alfred State Wrestling team through their NCAA III transition in 2019. During this time Mr. Hirsch was the RTI Director at Alfred Almond Central School. Mr. Hirsch is currently the middle/high school principal at Franklinville Central School.

Mr. Hirsch resides in Arcade with his wife and their two beautiful daughters.

Each year, candidates are nominated by friends, family, colleagues or other associates for their impactful contributions to their profession and distinguished service to the community and/or Genesee Community College. The GCC Alumni Hall of Fame, which is located on the second floor of the Conable Technology Building, boasts honorees from a wide variety of industries and backgrounds.

The complete list of Hall of Fame members is available at https://www.genesee.edu/offices/alumni/hall-of-fame/.

The inductees’ photos are available at:

The Alumni Hall of Fame logo is: http://marketing.genesee.edu/images/AlumniHallofFame.jpg