Women of the Arts Rock at GCC 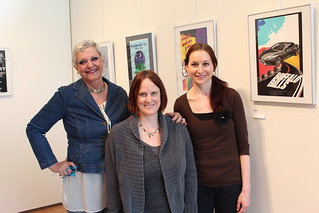 WomenoftheArts
5 years ago ago by Genesee Community College.

Batavia, NY- Genesee Community College celebrates its “women of the arts,” three of whom recently have been recognized for their exemplary work. The College named Fine and Performing Arts secretary Jeanie Thompson its Employee of the Month for April; Fine Arts Associate Professor Heather Jones has been selected to receive a SUNY Chancellor’s Award for Excellence in Scholarship and Creative Activities; and Director of the Fine and Performing Arts program Maryanne Arena has been selected to receive the YWCA Women of Distinction Racial Justice Award. Arena will be recognized at the Awards Gala on Saturday, June 13, 2015 at GCC.

Jeanie Thompson, of Attica, is a GCC alumna who earned her Administrative Assistant AAS in 2007. She also has a Bachelor’s Degree in English from SUNY Geneseo and previously worked as a newspaper reporter and copy editor before pursuing a career in the secretarial arts. “My primary job is keeping everyone in my department organized!” she said. Jeanie handles everything from supply orders to payroll authorizations, facility usage to budget maintenance. Her colleagues compliment her excellent record-keeping and editing skills, and her skill as a liaison to the college community for the Fine Arts Department, where she has worked for five years.

Heather Jones began teaching as an adjunct instructor at GCC’s Dansville Campus Center in 2002. A Livingston County resident, she has also taught at Livonia High School and Dansville Primary School as well as RIT, Empire State College and SUNY Geneseo. She joined GCC full time in 2008 and was named Associate Professor in 2014. Heather is active with numerous college committees including the Sustainability, Arts Event Planning and Gallery Management Committees.

In addition to her teaching work, Heather owns GlassFeather Studio in Conesus where she creates her own artwork, teaches community workshops, takes on commissioned projects, and volunteers as a juror for local art shows. She is also a co-founder of Good Nature Press, which develops original writing and illustration for educational and professional publishing companies. Heather has travelled extensively to study art and leads a study abroad program to The Netherlands through SUNY Brockport.

Maryanne Arena came to GCC in 2004. A native of Brooklyn, Maryanne at one time worked as a New York City police officer. Her theatre career has taken her to colleges in Michigan, Pennsylvania, and Massachusetts. In every role Maryanne has taken on, she has brought a dedication and commitment to community and a willingness and desire to work with all people.

In nominating her for the YWCA’s 2015 Women of Distinction Racial Justice Award, GCC Audience Services Manager Cathy DeBellis noted that Maryanne is a champion of equal rights for all students. She is also not afraid to pursue less popular and socially uncomfortable topics instead of more light-hearted entertainment. Among the topics addressed in her shows: racial inequality, domestic violence, schizophrenia and suicide. “Maryanne believes that it is her social responsibility to encourage her students to grow, not just as students and performers, but as responsible individuals in our society,” DeBellis said.

Arena will be honored June 13th along with the other Women of Distinction award winners who include Eve Hens for Economic Empowerment, Kathy Panepento for Peace, Heather Cummings for Military/Veteran, Theresa Asmus-Roth for Advocacy/Civic Engagement and Lawley Genesee for Corporate/Social Responsibility. The Women of Distinction Awards Ceremony begins at 5:30 p.m. in the Stuart Steiner Theatre, followed by a reception in the William W. Stuart Forum.