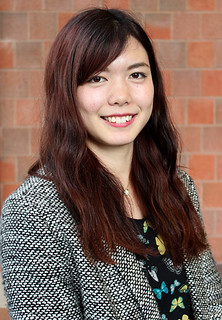 Ai Miyazaki 2015
5 years ago ago by Genesee Community College.

GCC’s Multicultural Communications Club continues its collaborative efforts and cooperation with Toastmasters International by hosting an evaluation contest at GCC, which included the SUNY Geneseo Toastmasters Club. Attendees had the opportunity to learn how to improve their speaking and their evaluation skills with support and input from the broader audience and larger group.

The contest required a test speaker and Ai Miyazaki, current GCC student and co-president of the Multicultural Communications Club served in this demanding role. Miyazaki is a second-year international student from Wakayama, Japan. She delivered a six-minute speech and listened intently as the contestants evaluated her efforts and provided feedback in numerous areas.

“Ai is passionate about improving her English speaking skills and is challenging herself by stepping out of her comfort zone,” noted Jackie Di Bella, club advisor. “It can be a very humbling experience to speak in front of a large group of people, but Ai rose to the occasion to improve.”

The College and GCC’s Club provided two judges for the competition Natzuki Hyodo and Earin Kwak. Both are international students also from Japan and have been club members since 2014. Natzuki serves as co-president and Kwak acts as sergeant of arms. Together, they were part of the judging team that decides the best evaluator. Among their considerations, the judges looked at analytical quality, the evaluator’s recommendations based on the strengths and weaknesses of the speech, technique, the manner in which the evaluator presents his or her comments, and the summation or how the evaluator concludes his or her evaluation of the speaker.

Another skill Toastmasters practice is expressing a thought within a specific time. The GCC Club provided a chief timer, Keith Compton to the competition. Compton is a 2013 graduate of GCC and has been a member of the Club since 2012. As timer, he was responsible for carefully monitoring the time for each evaluator to provide his or her input.

Approximately 50 people attended from Area 21 and District 65 attended the competition, an area ranging as far west as Buffalo and as far east as Utica.

The GCC Multicultural Communications Club currently has approximately 60 members, and many are international students who are eager to develop their communication and leadership skills. Formed in March 2011, the club offers learn-by-doing workshops in which participants hone their skills in a no-pressure, supportive atmosphere. Members evaluate one another’s presentations and the feedback process is a key part of the program’s success. The next meeting is Monday, November 2 at 5 p.m. in room T102 of the Conable Technology Building.

Anyone interested in joining GCC’s Multicultural Communications Club may contact Di Bella at (585) 278-8851 or via email at jedibella@genesee.edu.

For images from the October 3, 2015 Toastmasters International Competition held at GCC go to:

GCC international students who are members of the College’s Multicultural Club/Toastmasters International Club: Natsiki Hyodo and Earin Kwak, both from Japan, and Jorgio Savio from Timor Leste. Photo by Ai Miyazaki

Photo of Ai Miyazaki, who also works as a photographer in GCC’s Marketing Communications Office.