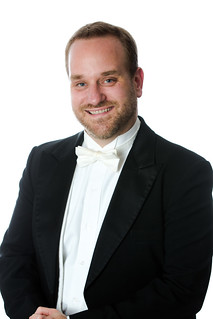 Stafan Sanders_BPO_Conductor
6 years ago ago by Genesee Community College.

BATAVIA, NY - The Genesee Community College Foundation invites the community to kick off the holiday season at Encore with the theme: Nature’s Bounty: Roots to Bloom. The annual gala on Tuesday, December 15, 2015 features seasonal music from the two-time Grammy Award winning Buffalo Philharmonic Orchestra, led by Associate Conductor Stefan Sanders. Encore raises funds for GCC student scholarships and will be chaired this year by Robert (’74) and Lori Bennett of LeRoy. Robert currently serves on the GCC Foundation Board of Directors.

The event begins with a prelude sponsor reception at 5 p.m. in the lobby of the Stuart Steiner Theatre. Guests will have the opportunity to meet Conductor Sanders, who is making his first appearance at Genesee Community College’s Encore Gala, and also artist, curator and collector Gerald Mead. They can explore Mead’s exhibition on display in the Roz Steiner Art Gallery which is entitled, “Of Niagara: Works from The Gerald Mead Collection.” The exhibit features the work of 62 artists from Niagara County covering all media including an early 20th century watercolor by Raphael Beck, designer of the seal for the 1901 Pan-American Exposition, and a 2014 digital photograph by Joe Ziolkowski, current instructor of photography at GCC.

At 6 p.m., guests will move into the William W. Stuart Forum for a dinner reception with sensational food selections and a cash bar. After dinner, the Buffalo Philharmonic Orchestra takes the Stuart Steiner Theatre stage for a holiday pops concert lead by Conductor Sanders beginning at 8 p.m. The evening concludes with an exquisite dessert nightcap at 9:30 p.m. to be held in the Wolcott J. Humphrey III Student Union.

Sanders is an imaginative musician, devoted educator and ardent champion of many types of music. He holds the Montante Family Endowed Associate Conductor Chair with the Buffalo Philharmonic Orchestra, where he leads performances on the Classical and Popular series’ as well as Education and Family concerts. In addition, Sanders is the new music director for the Greater Buffalo Youth Orchestra. He has collaborated with an array of distinguished guest artists and orchestras including engagements with the Orquesta Sinfónica de Guayaquil (Ecuador), Virginia Symphony, Symphoria (Syracuse NY), Naples Philharmonic, San Antonio Symphony, Austin Symphony Orchestra, Austin Lyric Opera, Corpus Christi Opera, Round Top International Festival Institute. Sanders makes his European debut with the Filharmonia Warminsko-Mazurska in Olsztyn, Poland this season.

Prior to his conducting career, Sanders was an internationally renowned trombonist, performing as a soloist in North America, Asia and Europe, and was a member of the BPO’s trombone section for seven seasons. He was invited by Sir Elton John to play in the orchestra for his Radio City Music Hall concerts in 2004, which was recorded for the Bravo Television Network. He began his formal conducting studies at the University of Texas at Austin, studying as a fellow at the American Academy of Conducting at Aspen under the tutelage of maestros, Robert Spano, Larry Rachleff and Hugh Wolff. He is a graduate of the University of Texas at Austin and the Juilliard School.

Reservations for Encore: Nature’s Bounty: Roots to Bloom are requested by November 30, 2015. Questions can be directed to the GCC Foundation at (585) 345-6809 or via email foundation@genesee.edu.

Editor’s Note: A photograph of Associate Conductor of the Buffalo Philharmonic Orchestra Stefan Sanders is available at:
http://marketing.genesee.edu/images/Stafan Sanders_BPO_Conductor.jpg