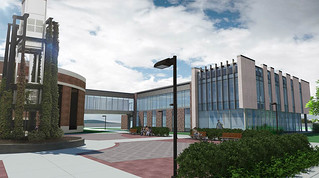 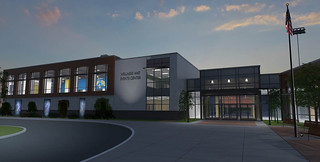 Batavia, New York — “Construction documents are almost complete and everything is on schedule,” Kristin G. Schmitt, AIA, principal of JMZ Architects and Planners told Genesee Community College Board of Trustees at the monthly meeting Monday night. “It has been a smooth process, which is a testament to the College,” she added.

The construction bid packages with all the necessary documents for contractors to submit their cost estimates for the project are anticipated to be ready for review on Monday, February 8, 2016. The proposed deadline for the College to receive the publicly opened bids is Tuesday, March 8, 2016. JMZ anticipates five different bid packages for Site Work, General Contracting, Electrical, Plumbing/Fire Protection, and Heating, Ventilation and Cooling (HVAC).

As stipulated by the Board of Trustees during the early planning process, JMZ is carefully crafting the bid packages to attract as many local contractors as possible. The two separate facilities, the 18,500 square foot Student Success Center and the 56,000 square foot College and Community Events Center, are being built on parallel construction schedules allowing contractors to bid on both projects or individual projects.

“We anticipate good participation from the local construction community and will be reaching out to them,” Schmitt said. The project will also be announced in area newspapers and the Dodge Report. Once the bidding and project award process is complete, construction will begin in April with a formal ground breaking ceremony scheduled for Thursday, April 28, 2016 at 4 p.m.

The College and Community Event Center located at the far west side of the Batavia campus near the turf field will begin first so as to not interrupt College’s activities and spring semester traffic flow. The Student Success Center will begin after the Commencement ceremony on May 22, 2016. Project completion for both buildings is expected the following summer in 2017.

In addition to reviewing the construction schedule, Ms. Schmitt presented six different schematic presentation boards that illustrated both buildings employing state-of-the-art graphics that combine photographs of the existing facilities blended with the new architectural renderings. A dramatic Student Success Center is shown at night with the lights from the large glass foray reflecting out onto the Clock Tower Plaza. Viewers can also appreciate how the Student Success Center will connect with the Conable Technology Building through the second level bridge. Interior illustrations reveal an open lobby and lounge with two-story glass windows, an open stair case and a fire place.

“This will be the new front door to the whole campus,” GCC President James Sunser, Ed.D. said. “The new facility is exciting, but more exciting is how it will allow us to reinvent how we support our students in being successful. Like a case manager, our new student success coaches will know what students need and proactively help them through the process.”

Interior and exterior renderings of the College and Community Events Center were also reviewed illustrating the dual facility. The sizable arena, which will be the largest open floor space in the GLOW region (Genesee, Livingston, Orleans and Wyoming Counties), is accented by a long, glassed-in arcade leading to the central entrance and lobby that connects the two buildings. The smaller building provides classrooms, locker rooms, coaches’ offices, the fitness center, meeting rooms and a press box overlooking the existing turf field. The large arena will not only accommodate  an array of athletic competitions, but the open space will allow all kinds of civic, community, trade, industry as well as college events—from farm, boat and tractor shows to commencement ceremonies where a whole family can sit together. The new facility is expected to draw as many as 500,000 visitors to the campus each year.

Both presentation boards included samples of different flooring, brickwork, ceiling and wall tiles, window mullions, paint, stair treads and counter tops. Combined, the two projects will provide an additional 74,000 square feet of new indoor space at GCC, allowing the College to repurpose some of the existing space for labs and classrooms accommodating new academic programs such as Nanotechnology AAS. The overall building project follows GCC’s Facilities Master Plan, which was approved by the Board and SUNY (State University of New York) more than two years ago.

For architectural renderings by JMZ Architects and Planners go to: