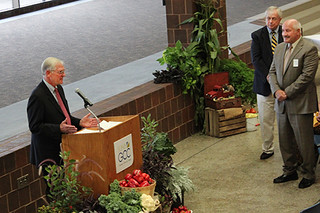 Victory_party_1
6 years ago ago by Genesee Community College.

Citizens and business organizations throughout the Genesee-Livingston-Orleans-Wyoming region contributed $5,214,213 to date in support of the Genesee Community College Foundation’s “Creating Our Future Together” campaign, General Chair Craig Yunker reported to the public yesterday evening. Mr. Yunker thanked and praised community supporters for helping the Foundation reach its $5 million fund raising goal at the campaign’s victory celebration held at the Batavia Campus’ William W. Stuart Forum. The campaign will help make a new Student Success and Event Center possible on GCC’s Batavia Campus, and will create many new endowed scholarships for students living in communities served by the College’s six campus centers.

Foundation President Robert L. Boyce told the 140 guests that contributions to the campaign are still welcome, especially gifts in support of student scholarships. Mr. Boyce drew laughter and applause when he held up a copy of a blank campaign pledge card, and told supporters that he had pledge cards available for anyone who had not yet made a gift.

Dr. James M. Sunser, President of the College, said that the two building projects will be “transformative” for students and the wider community. He explained that the College plans to begin individualized success coaching for students using the new Student Success Center after it opens in spring 2017. He noted that the Event Center will make a variety of new educational, business, and athletic activities available for students and community residents. Like the Student Success Center, the Event Center will open in spring 2017. “The opening of these two buildings will coincide with the College’s 50th anniversary,” Dr. Sunser said. “We will have much to celebrate.”

The building projects are being made possible through a combination of state, local and private funding. All of the funding is now in place, Dr. Sunser said yesterday evening, and architects are working to complete final designs for the new building before year-end. “Next spring, you will see construction activity on the Batavia Campus,” he said.
Mr. Yunker stressed the importance of both public and private funding in making the new buildings possible. Mr. Yunker, a former Genesee County legislator and former Chair of the Genesee County Legislature, thanked and praised county legislators for supporting the projects early on. “They embraced the new buildings and new services, and have been supportive and encouraging as we moved these projects forward.”

Mr. Yunker also noted the significance of GCC’s upcoming 50th anniversary, and drew parallels between the “Creating Our Future Together” campaign and the community activism that resulted in the College’s founding nearly 50 years ago. “I remember my dad talking about the impact a community college could have on this region,” Mr. Yunker said. “He and many others went door to door to promote the idea of a college.”

Genesee Community College received its charter from the State University of New York in 1966, Just months after Genesee County voters approved the creation of the College in a referendum. GCC is one of the few citizen-founded community colleges in the United States.

Mr. Yunker introduced members of the “Creating Our Future Together” campaign cabinet who led the successful effort to raise funds over the last 20 months. He praised the generosity of the campaign cabinet, and what he called the “historic generosity” of the local community.

Members of the campaign cabinet include:

As Dr. Sunser, Mr. Yunker and Mr. Boyce offered their comments, a colorful montage of photographs of students and college activities flashed overhead. The visuals included an honor roll of hundreds of area residents and organizations supporting the campaign to date, as well as colorful renderings of the new Student Success Center and Event Center. Dr. Sunser said that the two new buildings will dramatically change the look and feel of the Batavia Campus, in addition to providing important new educational services and opportunities.

The Student Success Center will house many staff members who provide critical services to students outside of the classroom, and will be the focal point for academic, career and success coaching for students. The $5 million, 9,000 square foot facility will nearly encircle the clock tower plaza, transforming the outdoor space into an inviting courtyard.
The Event Center will be located adjacent to the outdoor athletic fields on the Batavia Campus. At a cost of $15 million, the 43,000 square foot Center will be able to accommodate a wide variety of events.

The campaign also includes funding for permanent new scholarships for students living in communities served by the College’s campus centers located in Albion, Arcade, Dansville, Lima, Medina and Warsaw. New scholarships will help meet the College’s commitment to making higher education possible for all deserving local students.
Once the two new building projects are completed in 2017, vacated areas within the existing facilities of the Batavia Campus will be reconfigured for additional classrooms and instructional spaces.

Foundation Executive Director Richard Ensman said that, while the campaign hosted a victory celebration, he knows that a number of individuals are still considering contributions. He said that donors can designate contributions in support of the building fund or general community scholarship endowment funds. Pledges in support of the campaign may be paid over a five-year period. Donors may also establish scholarship funds in their names, the names of loved ones or the names of organizations. He noted that the College plans to permanently recognize supporters to the campaign, through plaques located in the new structures, the names of permanent scholarships and through a large donor wall. Individuals are invited to call the Foundation office at 585-345-6809 to make a pledge or for more information.

Genesee Community College has become known throughout the nation for academic excellence and innovation, the victory celebration speakers noted, and each of the speakers told supporters that the new buildings and new scholarships will set the stage for innovative new services for students for decades to come.

Foundation President Boyce said that the “Creating Our Future Together” campaign reflects the community’s willingness to come together and support important projects. “It’s all about the team,” Mr. Boyce said. “Our campaign cabinet and our communities are the team that’s making all of this possible and creating a great future.”