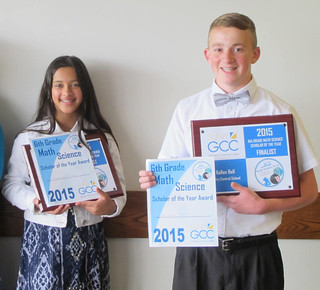 ACE_Math_Science_Winners_2015
7 years ago ago by Genesee Community College.

Embedded within the competitive application process was an opportunity for two students to earn a full scholarship to participate in their first year of the Math Science Preparatory (MSP) program. Two students were selected from among ten Scholar of the Year finalists to win the annual award, and all the finalists were recognized at the science fair competition and awards event on June 4 at GCC. The scholarship winners and 2015 Math Science Scholars of the Year are Ariana deSa-Frias of St. Joseph’s School and Kellen Bell of Perry Central School (See photo).

Ariana Frias earned the highest mark in the competition by performing exceptionally well on the competitive placement examination - scoring well above the entrance criteria for the program. Her score was combined with her exceptional science fair project demonstrating the use of electronics and software to measure and resolve a common problem in dance – precise timing! Outside of the classroom Ariana is a competitive dancer and avid musician, and sings with the Eastman Children’s choir.

Kellen Bell’s experiment in atmosphere creation astonished the judges. His creative application of biochemistry to generate CO2 inside of a biodome may likely be applied in the future as he pursues his plans to explore the universe. With a strong desire to become an agent of change, Kellen dreams of contributing to a world where knowledge is free to everyone, and he sees science as a means to achieve ambitious goals.

ACE program specialist Karlyn M. Finucane says she and other members of the GCC ACE team are looking forward to working with all of the students who were nominated for the Math Science Preparatory award throughout the next several years. “The application process this year required students to demonstrate their individual interest in learning math and performing science. The results were impressive and the entire Math Science Preparatory Team is looking forward to working with these exceptionally bright and ambitious students,” reports Ms. Finucane.

In alphabetical order, students accepted to participate in the 2015 cohort of the MSP Program include:

ACE Programs offer area high school students a variety of opportunities to pursue college credit concurrently with their high school education. MSP is an enrichment opportunity leading to an accelerated degree completion opportunity through which participating students will be able to make significant progress toward an Associate Degree in Math and Science or Engineering, and a few very determined students can earn their high school diploma with an associate degree later the same year!