Genesee Community College congratulates criminal justice student Jessica Cherry, whose essay earned the Grand Prize in the David A. Garfinkel Essay Contest sponsored by the Historical Society of New York Courts. Cherry and the other two winners were recognized at an awards ceremony in the New York Court of Appeals Courtroom on Law Day, May 5, 2015. GCC paralegal studies major Connie Eadie was one of eleven students to receive honorable mention. Both Cherry and Eadie are students of Assistant Professor Charles Scruggs, who has served as faculty mentor for seven of the students who’ve earned recognition in the Garfinkel Essay Contest. “The success of our history, paralegal, and criminal justice students in this highly-competitive contest is gratifying,” said Prof. Scruggs. 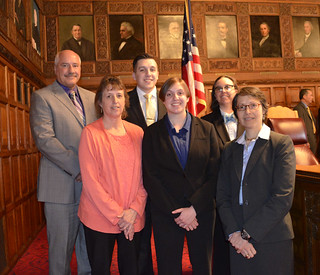 The Garfinkel Essay contest invites community college students from around the state to submit essays on topics of legal relevance. This year they were charged with addressing the question: “How have the New York Courts addressed equal human rights for the LGBT (Lesbian, Gay, Bisexual, Transgender) Community?”

Cherry, 20, is from Oakfield and is studying Criminal Justice at GCC. In her essay, “A look at how NYS Legislation has profoundly impacted LGBT Family Law,” Cherry writes that “In New York State, family is two women getting married and becoming wives; family is two men getting married and becoming husbands; family is a man and a woman getting married to become husband and wife; and family is all LGBT families being able to legally adopt including if it is their partner’s child. New York has done an excellent job in striving for LGBT equality, especially in Family Law, and they have become a role model for many states that have yet to legalize same-sex marriages or certain adoption rights.” She goes on to chronicle the legal evolution of these rights and closes by stating “We can only hope that the states yet to legalize gay marriage and certain adoption rights follow in the footsteps of New York State, and all of the other states that have gotten on the right side of history, and they come to learn that love is love.”

Cherry said she was shocked to have won. “It hasn’t even fully sunk in yet, but now that it’s becoming more real, I am extremely proud of that essay and the message it sends to readers.” She said she wrote the essay based on her personal belief in “equal rights for everyone in all aspects of life, regardless of things such as sexual orientation.” The Historical Society provides a link to Cherry’s full essay online at:
http://www.nycourts.gov/history/academic-center/garfinkel-essay-scholars....

“While Jessica may have been surprised by her win, I was not,” Scruggs said. “I have had the privilege of working with Jessica in two different courses and she has proved to be a conscientious student who consistently submits exemplary work. In this essay, the head and heart have worked in tandem to produce a well-researched and inspiring analysis of the struggle for LGBT equality.”

Cherry is the daughter of Rebecca Cherry and Michael Cherry. She has one older brother Ben Cherry. Upon graduation from GCC this spring she plans to transfer to SUNY Brockport in the fall to pursue a Bachelor’s Degree in criminal justice with a goal of becoming a police officer.

Gloria and Barry Garfinkel initiated the essay contest in 2008 in memory of their son, David. The competition seeks to draw students with a wide range of interests in law, history, social science and general research writing.