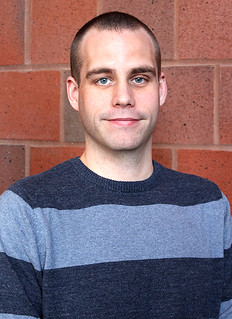 DrewCrofts
6 years ago ago by Genesee Community College. 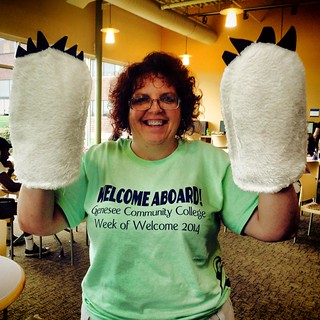 ConnieEadie
6 years ago ago by Genesee Community College.

Batavia, NY- Genesee Community College is pleased to announce Andrew Crofts has been named March 2015 Employee of the Month. Drew is the Sports Information Coordinator for GCC athletics. A Batavia native who earned his Bachelor’s Degree in Communications from The College at Brockport, Drew has worked at GCC since 2011.

As Sports Information Coordinator, Drew handles all athletics communications, from social media to press releases and the Cougars website, www.geneseeathletics.com, which launched last year. He managed the development of the new site. “Drew consistently delivers quality service while satisfying a wide range of needs,” the College noted in naming him Employee of the Month.

Drew has been instrumental in the growth of the athletics department’s presence on social media. Over the past year there has been plenty to “tweet” about. GCC women’s soccer, women’s volleyball and men’s basketball teams have all competed in national tournaments. Drew enjoys working with all the teams and finds his favorite aspect of the job is “The people. They make it fun to come to work every day.”

Drew is actively involved in sports outside of GCC as well. “There’s a good chance that on any given spring or summer day you will find me on the golf course,” he notes. You might also find him on the sidelines or in the dugout. He just started his second season as head modified baseball coach for Batavia City Schools and this fall will be his fourth season as a high school football coach for Elba/Byron-Bergen.

Drew is the son of Jan and Jeff Crofts and has a brother, Daniel, and a twin sister, Alyssa, who is an associate at GCC’s Albion Campus Center.

Genesee Community College is also pleased to announce Connie Eadie has been named the March 2015 Student of the Month. Connie, who lives in Le Roy, never finished high school but has been a President’s List honoree for all her semesters at GCC. A Paralegal Studies major this non-traditional student “fell in love with the law and fell in love with college.”

Connie attended Le Roy High School and would have graduated in 1985, but never finished, instead earning a GED (General Educational Development) in 1991. Connie has been married to her husband Mike Eadie for 30 years. She was a stay at home mom to two now-grown sons, Michael Eadie and Brendan Zyglocke-Eadie, then owned her own salon.

In 2010, she sold the salon to help care for two grandchildren after her son went through a divorce. “By 2012, he had found an amazing new wife and they moved out,” she recalled. “I suddenly found myself lonely and depressed.” Her son’s divorce had taken an emotional and financial toll on the family. “So I decided that I would attend college and learn about the law so that we couldn’t be hurt again.”

Connie, now 48, was at first afraid she wouldn’t fit in at GCC or be welcomed by other students. “I will admit, there were a few rough spots in the beginning, but I decided to get involved, go to club meetings, re-start the Paralegal Club, and through attending the Leadership Certificate Program, I became an orientation leader,” she said. “What I found was that I was accepted and I made some wonderful, amazing life-long friends…of all ages!!!” She credits two professors in particular with aiding her success, English professor Marie Iglesias-Cardinale and attorney Karyn Bryson, who teaches in the Paralegal program. “She has given me the tools to succeed in my future endeavors and has never stopped encouraging me along the way,” Eadie said.

In naming her Student of the Month, the College noted Connie’s volunteerism and “outstanding leadership skills.” She is the president of the Student Paralegal Association, a member of Phi Theta Kappa honor society, a nominee as outstanding adult student, and has received special recognition each semester from Student Support Services. She currently interns at Neighborhood Legal Services and after graduation hopes to work in a family law office, “somewhere that I feel I can really make a difference helping people.”

Besides her husband and two sons, Connie has three siblings and three grandchildren, Gracie (8), Seth (7), and Harlow (2), with a fourth on the way in May.

A photograph of Connie Eadie is available here:
http://marketing.genesee.edu/images/ConnieEadie.jpg