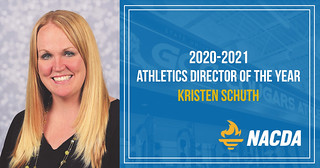 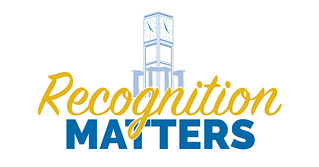 Batavia, New York - Following what has been arguably one of the most challenging years for athletics departments across the nation, the National Association of Collegiate Directors of Athletics (NACDA) has recognized Genesee Community College’s Assistant Vice President of Student Engagement & Inclusion and Director of Athletics, Kristen Schuth as the 2021-21 Junior/Community College Athletics Director of the Year.

In addition to the countless impacts the coronavirus pandemic has had on collegiate communities, NACDA has also had to reinvent its recognition ceremony and will present Schuth with the Director of the Year honor at its 56th Annual Convention virtually in July 2021.

“I’ve always been immensely proud of GCC’s athletes and the strong teaching and coaching staff we have. They make me want to work harder and do more, and so, I love what I get to do and am so grateful for the team I’m surrounded by. With athletics facilities among the finest in the region and partnerships with other areas in the College such as Student Success and Student Engagement & Inclusion, our programs and students have demonstrated growth and strengthened relationships,” said Schuth. “I look around the country and I see the amazing things my counterparts are doing to uplift their athletes and support their programs and I am truly humbled by this award.”

Schuth first came to GCC as Head Softball Coach in 2004 and became an Adjunct Instructor in the Department of Health and Physical Education in 2005. Between 2004-2010 Schuth compiled a win/loss percentage of .534. Prior to her first season, the softball team went 7-19. But under her leadership, her teams recorded five winning seasons, finished in the top four in Regional Finals and produced two NFCA (National Fastpitch Coaches Association) All-Americans. In 2010, she was named WNYAC (Western New York Athletic Conference) Women’s Softball Coach of the Year at GCC. After a short three-year break while she served as Assistant Director of Athletics at Finger Lakes Community College, Schuth returned to GCC as the Director of Athletics in 2013. As part of an effort to more fully integrate Student Engagement and Inclusion initiatives into every aspect of GCC’s student experiences, Schuth added this area to her oversight in 2019 in becoming the Assistant Vice President for Student Engagement & Inclusion, in addition to retaining her role as Director of Athletics.

Schuth grew up in Hilton, NY and is a member of the Hilton High School Athletic Hall of Fame. At SUNY Brockport she starred in both softball and basketball, earning letters in both sports all four years as well as being named SUNY Brockport female athlete of the year in two consecutive years. She was an All-American in basketball her senior year. She is a member of the SUNY Brockport Athletic Hall of Fame. Kristen earned her master’s degree from California University of Pennsylvania and now resides in Spencerport with her husband and two sons.

“When I was notified that Kristen would be receiving the Athletics Director of the Year Award from the NACDA, I couldn’t have been more proud,” said Dr. James Sunser, President of Genesee Community College. “Kristen exemplifies what it takes to be a great leader. From the wisdom and knowledge to the skill and experience, her students and her staff look up to her and know she will do what it takes to provide leadership and guidance. Throughout the adversities of the last year, Kristen has accomplished so much and has led GCC’s Athletics Department with a courage and strength to be envied.”

This prestigious award has earned Schuth a place in GCC’s Recognition Matters series which highlights the accomplishments of the College’s faculty, staff and students. Officials at GCC have embraced this series as a way to acknowledge not only the achievement, but the high quality of the recognized individuals who demonstrate GCC’s “beyond expectations” brand.

For more information or photographs contact Vice President, Development and External Affairs Justin Johnston at (585)345-6809, or via email: jmjohnston@genesee.edu.

A photograph of Assistant Vice President of Student Engagement & Inclusion and Athletic Director Kristen Schuth, courtesy of GCC, is available at: https://marketing.genesee.edu/images/SchuthDOY2021.jpg