Highest Honors Received in all Areas of the College
Wednesday, August 19, 2020 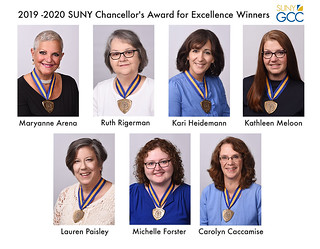 ChancellorsAwardWinners19-20
1 year ago ago by Genesee Community College.

Batavia, New York - Seven members of the Genesee Community College team have been recognized by the State University of New York for outstanding contributions to their profession, the campus and the community. The SUNY Chancellor's Award for Excellence is given in recognition of Consistently superior professional achievement and encourages the ongoing pursuit of excellence.

GCC is proud to announce Carolyn Caccamise and Kari Heidemann have received the SUNY Chancellor’s Award for Excellence in Teaching, which recognizes consistently superior teaching at the graduate, undergraduate or professional level of the highest quality. To say that Carolyn Caccamise has been an integral part of GCC’s veterinary program would be an understatement.  Director and Associate Professor of the College’s Veterinary Technology program, Carolyn Caccamise played an integral role in building the program to what it is since she started as an adjunct instructor in 2011. Armed with a bachelor’s from Eisenhower College and a Doctor of Veterinary Medicine from Cornell University’s College of Veterinary Medicine and extensive ongoing learning, Caccamise maintains veterinary practices which helps ensure her students are at the cutting edge of practical learning and application. Caccamise resides in Alexander, NY.

For Excellence in Scholarship and Creative Activities, Director of Fine and Performing Arts Maryanne Arena received a SUNY Chancellor’s Award for Excellence. An award-winning educator, director, entertainer, public speaker, and police officer, Arena was named a Paul Harris Fellow by Rotary Club and received three Medals of Valor – including one for capturing one of the New York Police Department’s “Ten Most Wanted” criminals. Since she joined GCC in 2004, Arena established GCC’s Children’s Theatre tour, Black History Month/ Social Justice productions and produced numerous performances. Arena also received a YWCA Women of Distinction Award for Racial Justice in 2015, a citation from Mental Health Association of Genesee and Orleans Counties for producing, directing, and acting in ‘Night, Mother in 2012, and SUNY Chancellor’s Award recipient for Excellence in Professional Service in 2009. Arena became a Licensed Police Officer in NYC, a PD Officer Certified in East Stroudsburg, earned a bachelor’s degree from East Stroudsburg University and then a master’s degree in Acting & Theatre from Brooklyn College. She currently resides in LeRoy, NY.

The SUNY Chancellor’s Award for Excellence in Faculty Service which recognizes consistently superior service contributions of teaching faculty over multiple years, was awarded to Professor of Business Lauren Paisley. Paisley first began her relationship with GCC in 2002 as an adjunct faculty member and a part-time trainer in The BEST (Business & Employee Skills Training) Center – a role she still plays. However, in 2006, Paisley added full-time professor of Business at GCC to her resume. Since then, Paisley has served on the College’s Global Education Committee, International Student Organization (advisor), Academic Senate, accreditation work groups and committees for the Middle States Commission on Higher Education, multiple scholarship committees and numerous search committees to fill vacant positions within GCC. Her work with student organizations has resulted in thousands of dollars to local animal shelters, food pantries, and programming designed to encourage humanity and kindness. Paisley earned her bachelor’s degree from D’Youville College and a master’s degree from SUNY Buffalo in Business Administration. Paisley resides in Middleport, NY.

Human Communications and Behavior Department Secretary, Michelle Forster received the SUNY Chancellor’s Award for Excellence in Classified Service. This award is a system-level award established to give recognition for superior performance and extraordinary achievement by employees in the Classified Service. These awards demonstrate SUNY’s commitment to individuals who provide superior service to its students and the community at large. Forster has served as a secretary in GCC’s Human Communications and Behavior department for 11 years. She has trained other secretaries on many operational processes, covered for other staff positions during absences, and provided superior customer service to students, faculty and staff in all circumstances. She regularly volunteers to participate on College committees and fully embraces GCC’s passion to go “beyond expectations.” Forster resides in Oakfield, NY.

Recognizing consistently superior professional achievement, the SUNY Chancellor’s Award for Excellence in Professional Service was awarded to Kathryn Meloon. Meloon joined the Business Office at GCC in 2000 as a staff accountant, became assistant director of Finance in 2002 and in June of 2007, Kathryn was promoted to her current role of bursar where her primary focus is leading the Student Accounts Office. However, Meloon consistently goes above and “beyond expectations” for GCC and its students. For the past three years (2016-2019) she wrote and was awarded the President’s Innovation Award which allowed GCC to create its New York City Extended Student Visit initiative. The NYC Extended Student Visit brings approximately 20 already accepted NYC residents with limited financial means, on an overnight visit to experience GCC and Batavia firsthand. The visit allows these NYC students to envision themselves at GCC in an attempt to positively influence their decision to enroll. Meloon earned a bachelor’s degree at Houghton College and a master’s degree at Keuka College. She currently resides in Batavia, NY.

For more information or photographs please contact Vice President, Development and External Affairs Justin Johnston at 585-345-6809, or via email: jmjohnston@genesee.edu.

A photograph of the 2019 – 2020 SUNY Chancellor Award Winners is available at: