Emergency Vehicles Parade By -and- Above to Salute New Healthcare Workers
Monday, July 27, 2020 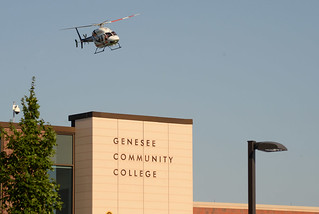 GCC_NursingRecognitionCeremony_FlyBy
9 months ago ago by Genesee Community College. 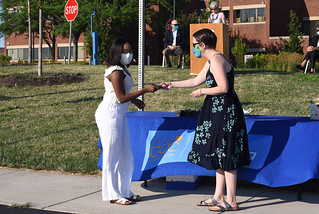 GCC_NursingRecognitionCeremony_Graduate
9 months ago ago by Genesee Community College. 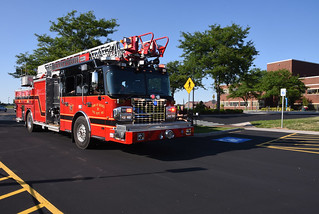 GCC_NursingRecognitionCeremony_Parade1
9 months ago ago by Genesee Community College. 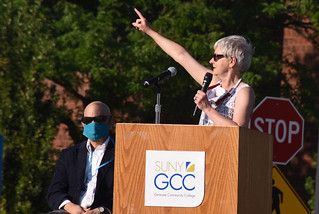 GCC_NursingRecogntionCeremony_LaurelSanger
9 months ago ago by Genesee Community College.

Batavia, New York - Ingenuity, kindness, tradition and hard work teamed up on Friday night in the parking lots of Genesee Community College to nudge aside the COVID19 pandemic for just an hour. The most recent graduates from GCC’s Antoinette Marchese Clancy School of Nursing were all invited to the annual Recognition Ceremony, but this year it was organized in a “drive-in movie” fashion safely following New York State’s social distancing guidelines. Graduates and their families parked their cars facing the lectern that was set up outside on the berm by the Student Success Center, and all guests could listen to the program on WGCC 90.7FM from their car radios, or watch it remotely through the live stream access.

And, as if to welcome their compadres into the field of healthcare and human services, a parade of emergency vehicles kicked off the event, and even a Mercy Flight helicopter, which is stationed nearby at the Batavia Airport did a fly-by tipping its wings to the newly minted nurses.

“It certainly was an evening to remember,” Laurel Sanger, director of the Antoinette Marchese Clancy School of Nursing said. “With the help and support of numerous people and departments across GCC’s campus and our wonderful community, I think we gave the Class of 2020 a memorable event. It really is a testament to how proud we are of these graduates.”

This class of nurses were not officially ‘pinned,’ however. Rather they were handed the emblem and certificate representing their accomplishments, and all were wearing masks and standing safe distances apart. Pinning ceremonies are a time-honored nursing school tradition that signifies official initiation into the brotherhood and sisterhood of nurses. In a typical year, this event happens the same day or weekend of GCC’s annual Commencement. But the nursing staff and College administrators decided to plan something special and a little different this year. Approximately 18 graduates from a total class of 54 were able to attend Friday’s event. Another 49 watched the program via live stream.

“For the easiest access of parking lots, late Friday afternoons in the summer are best for the campus community. Yet we were worried that families would not be able to hear the ceremony from their cars. That’s when WGCC stepped in, and then Media Services provided the remote live streaming access,” Sanger added. “And of course, it was wonderful that our Campus Safety team was able to network with local authorities for the parade. We are grateful to all for a special twenty-first century plan of action during a pandemic for this centuries-old tradition.”

Pinning ceremonies are rich with symbolism and history and date all the way back to the Crusades of the 12th century. During this time, the Knights of the Order of the Hospital of St. John the Baptist tended to the injured and infirmed Crusaders with new monks vowing to serve sick soldiers in a ceremony where each monk was given a Maltese cross, the first badges given to those who nurse. In more modern dates, Florence Nightingale was awarded the Red Cross of St. George in recognition for her tireless service to the injured during the Crimean War in the 1850s. To share the honor, she in turn presented a medal of excellence to her brightest graduates. By World War I, the practice of pinning new graduates and also awarding them caps, became a standard practice throughout the United States.

Genesee Community College continues its own tradition of teaching the next class of nurses and welcomes potential new students to sign up for one of the upcoming online Nursing Information Sessions scheduled at the following times:

To register online go to: https://www.genesee.edu/academics/programs/health/nursing/