Before the Snow Flies Take a Stroll at GCC 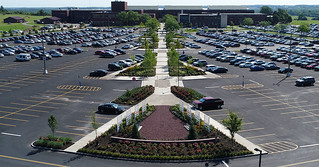 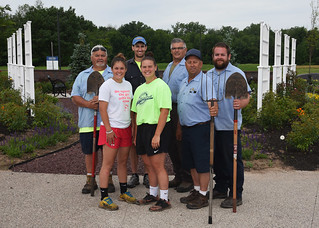 GCC_GroundsCrewSummer2019
1 year ago ago by Genesee Community College. 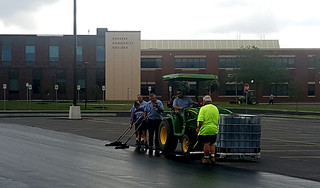 GCCPaversParadise
1 year ago ago by Genesee Community College.

Batavia, New York - It is finally finished! This past summer the multi-year parking lot project at Genesee Community College’s Batavia campus was completed, which established a new, expanded and safer configuration of the 12-acre parking lot. And perhaps most significantly, the project introduced a new pedestrian walkway that connects the west and east sides of campus giving those who walk to the new Richard C. Call Arena from the new Student Success Center or main building the opportunity to enjoy an 18,000 square-foot garden space that is approximately 720 feet long.

Under the leadership of Senior Groundskeeper Dennis Pietrzykowski, the GCC grounds crew took full advantage of the planting season and their in-house expertise to fill five themed garden areas that flank each side of the walkway. Each with a unique theme, the five gardens incorporate plants chosen specifically to create a medley of color, shape and texture for every season.

As visitors walk west from the College’s main building to the Call Arena, they will enjoy:

“In total, the new gardens added 50 large trees in more than a dozen varieties and more than 2,500 plants to the Batavia Campus,” Pietrzykowski said. “But my personal favorite is called Harry Lauder’s Walking Stick – it has curly branches and looks its best in the winter months. Everyone should visit campus to find it. Here’s a hint, it’s in one of the more formal gardens.”

The team introduced more than 130 tons of new top soil to accommodate all of the trees, shrubs, bulbs plants and other materials. In addition, the College was proud to work with all local businesses, contractors and suppliers to complete the project. “We purchased everything locally,” Pietrzykowski said. “I had all the suppliers on speed-dial and they were great.”

A photograph of the Rose Garden on GCC’s Batavia Campus is available at:

A photograph of the GCC Grounds Crew this summer standing near the Rose Garden is available at:

Resealing the parking lots at Genesee Community College was another important component of the project. http://marketing.genesee.edu/images/GCCPaversParadise.jpg