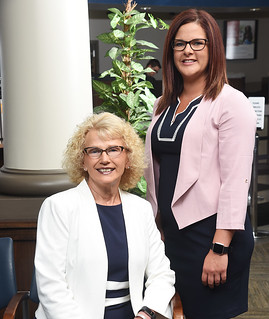 Encore2019_CoChairs
2 years ago ago by Genesee Community College.

Batavia, New York - As the fall season gets underway with brisk temperatures, mark your calendars for Genesee Community College Foundation’s 2019 Encore celebration, “An Evening of Elegance” co-chaired this year by Mary Blevins and Jenna Holota.

Join the entire GCC community for dinner, drinks, dancing and a holiday concert by “Nik and the Nice Guys” on Saturday, December 7, 2019 in the Richard C. Call Arena at GCC’s Batavia Campus. Tickets are on sale now at www.genesee.edu/home/foundation/events/encore/.

Since its inception, the Encore Gala has provided an opportunity for the local community to raise funds for student scholarships. In 2018, the Foundation awarded over $145,000 in scholarships. As the world and economic factors change, the need for scholarships grows – and so does Encore!

Blevins has lived and worked in Batavia for 28 years, and with her husband Richard, they raised their sons John and Matthew in this community. In addition to being the branch manager at ESL Federal Credit Union in Batavia, Blevins is the chairman of the Genesee County Chamber of Commerce Board of Directors.

“I’ve always believed in the work GCC does,” Blevins said. “I was so honored when Rick Ensman contacted me to chair this event. I’m excited to bring together new elements and admired traditions to through music, dining, dancing, networking, and friendship all wrapped up in “An Evening of Elegance” at Encore 2019. I hope everyone will come out to enjoy it and to support the scholarships that change lives for so many students.”

Holota, grew up in Batavia and is now raising her three-year old daughter, Mckenzie, in her hometown. As the assistant branch manager at ESL, Holota enjoys helping the credit union members through every financial situation they encounter.

“When Mary asked me to co-chair this event with her, I was both proud and honored. I’ve enjoyed attending the event in the past,” Holota said. “Knowing that I will be contributing to a scholarship program for GCC students makes it extra rewarding.

Each year, GCC offers opportunities to sponsor the Encore event. These sponsorships are critically important to the scholarships GCC provides its students and are available at several levels this year: the Holiday Chord Circle - $1,000; the Golden Guitar Society - $600 and the Inner Circle - $300. Each of these levels includes tickets (six, four or two respectively) for the event.

To become “An Evening of Elegance” sponsor, please complete the online forms at www.genesee.edu/home/foundation/events/encore/ or contact the Foundation Office at (585) 345-6809, or foundation@genesee.edu today.

Editor’s Note: For a photograph of Encore co-chairs Mary Blevins (seated) and Jenna Holota, go to: