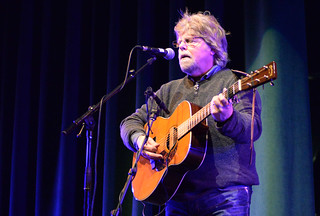 View on Flickr
4 years ago ago by Genesee Community College.

Batavia, New York - An annual spring adventure where students in GCC’s History Club visit important historical sites, museums and battlefields in April ultimately benefits the local lovers of blues music this fall. Sonny Mayo and the Lowdown are coming to GCC’s Stuart Steiner Theater on Friday, November 8, 2019 at 7 p.m. for an evening of excellent rhythm and blues featuring a great selection of original tunes and old favorites by a former GCC faculty member.  All proceeds from the concert will be dedicated to the History Club’s spring break history tour.

Frank Mayo is now a retired GCC public speaking professor, but he is anything but retired from his passion for music. Sonny Mayo, as he is known in the music world, is bringing his trio with him for a show that promises to give local music aficionados a taste of folk, blues and Americana music, and all for great cause.

Mayo released his first album, “So Far So Good,” out of Nashville in 1981. The album was critically acclaimed by Record World magazine and culminated a six-year apprenticeship in Los Angeles and Nashville. Since then, Mayo has released 11 albums on the indie label, Thunder Road Music. His most recent CD, “Chasing the Chord” was released in 2016 and is a blend of folk, blues and Americana, rich with vivid characters and editorial comments on societal issues. Mayo has also performed as an opening act, host or shared the bill with numerous musicians including but not limited to Eric Andersen, Eric Bibb, Rory Block, The Burn Sisters, Jen Chapin, Guy Davis, Bill Morrissey, David Olney and slide guitarist Roy Rogers.

Professor Mayo was once a GCC ‘office neighbor’ with Derek Maxfield, professor of history at GCC’s Batavia Campus. Their collegial conversations lead to a number of dynamic opportunities through the years, to share the new music and support the experiential learning for their students.

“Educational spring breaks are an important facet to the student experience and to learning outcomes. As students see these historic places for themselves outside of a classroom, they come away with a new appreciation for the problems, opportunities and even mistakes made by people in the past. They also learn about themselves, the world around them, and often, they make life-long friendships,” Maxfield said. “It is an honor that my former colleague and continued friend, Frank or Sonny Mayo, is willing to share an evening of music for such a worthy cause.”

Advance tickets are encouraged by contacting Derek Maxfield, GCC’s associate professor of History and History Club advisor, or Marie Kochmanski, clerk-typist in the second floor Humanities Suite Room B259 or Michelle Forster, secretary in the third floor GCC Human Communication and Behavior Suite Room B359. Presale tickets are $18 for adults and $20 at the door. GCC students and children under 12 are $10.

Editor’s Note: For a photo of Sonny Mayo playing at GCC in 2017 go to: