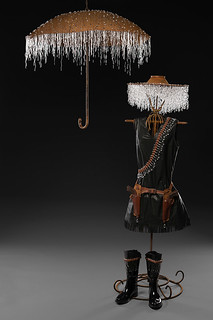 Rain Rustler
4 years ago ago by Genesee Community College. 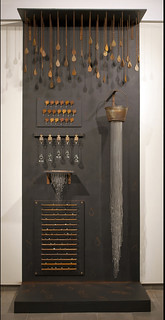 Oh the Water
6 years ago ago by Genesee Community College.

Batavia, NY-  Ever contemplate the critical role water plays in our world? For years, sculptural artist, Jennifer Hecker has been fascinated by the potential for a worldwide water crisis in the 21st century.

From November 16 to December 15, 2017, the public is invited to view Hecker’s work in the “Waterworks Water Tables & Other Aquatic Accoutrements” exhibit, on display at the Roz Steiner Art Gallery at Genesee Community College. Come and meet Hecker in person at the artist lecture on Thursday, November 30, 2017 at 12:30 p.m. Receptions will follow at 1p.m. and 5 p.m.

Hecker uses glass to represent the water she is sculpting because of its transparency and fluidity. Her works combine welded steel, iron and/or other recognizable objects positioned with glass in ways that depict what could happen during a real water crisis. The resulting works create analogies between ordinary object and the ideas and concepts they represent.

One of the concepts to inspire r, and this piece reflects an individual hoarding precious water in his/her basement. “The irony that, around here, everyone is trying to keep water OUT of the basement was not lost on me. In fact, its adds to the futility of the act. Water evaporates or grows mold or erodes away its container. And so, putting water on a shelf, under lock and key or in a holey bucket become metaphors for trying to hold on to the transient, the ephemeral—to life itself,” Hecker describes.

In 2016, a solo exhibition of her mixed media sculptures was exhibited in the Main Gallery of the Turchin Center for the Visual Arts in Boone, NC.  Her work has also been included in thematic exhibitions on water at Allegheny College in Meadville, PA, the Schweinfurth Art Center in Auburn, NY, and the State Street Gallery in Chicago, IL.  In 2013, Hecker was one of 42 regional artists invited to create new work inspired by the permanent collection of the Memorial Art Gallery in Rochester, NY in celebration of its centennial. In 2011, she was one of 30 artists from around the world to be featured in the book, Sculpture and Design With Recycled Glass, by Cindy Ann Coldiron (Schiffer Publishing).

Since 1989, Hecker has been teaching sculpture and general education art classes at The College at Brockport, State University of New York.  In 1999, she was awarded a Chancellor’s Award for Excellence in Teaching, and in 2002 she completed a six-year term as department chairperson. Hecker’s work has received awards from the Jerome Foundation, the Arts and Cultural Council of Greater Rochester, the United University Professions and The College at Brockport. Her work is included in the permanent collections of The Red Cross in Rochester, NY, The Children’s Inn at the National Institute of Health in Bethesda, MD, and The College at Brockport, as well as private collections throughout the country.

Additional work by Hecker can be seen on her website at www.jenniferhecker.net.

The Roz Steiner Art Gallery is open to the public Monday – Friday from 10am to 2pm and during special events as published at www.genesee.edu/campuslife/arts. Admission is free. For more information, contact Gallery Coordinator Mary Jo Whitman at (585) 343-0055 ext. 6490, or via email: mjwhitman@genesee.edu.

Images of the artist’s work, Photo Credit: Elizabeth Torgerson-Lamark, are available at: