CallArena_Jul17
4 years ago ago by Genesee Community College. 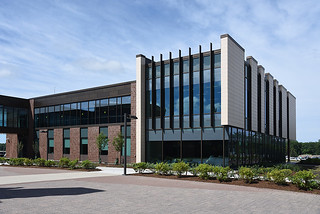 StudentSuccessCenter_July17
4 years ago ago by Genesee Community College.

Not many organizations celebrate their golden anniversary while opening up two new buildings valued at $25 million. And even fewer can claim they were founded through a successfully passed public referendum that was supported by a grass roots citizen campaign in the mid-1960s. Genesee Community College is proudly recognizing both these historic events with a series of special events next month.

With the anniversary theme “Our true-blue past, Your golden future,” GCC is focusing forward on an exciting future while simultaneously reflecting on a rich history with strong traditions. Underlining all of the College’s efforts—then, now and long into the future—is student success. The new 18,478 square foot Student Success Center exemplifies this most vividly as GCC transforms various student services into a stream-lined process under a new “success coaching” academic model.

Together, these two new buildings are collectively valued at just over $25 million, and they position the College to expand student success and opportunity through the coming years, while augmenting the economic growth of the GLOW region. To celebrate the opening of these buildings and recognize the College’s 50th Anniversary, the following series of events are planned for September 2017 at the Batavia Campus.

This special event will be attended by the many donors who contributed to the “Creating Our Future Together” capital campaign and supported the College’s successful fundraising efforts with $5.2 million dollars to support the new facilities at the Batavia Campus as well as endowed scholarships for students in the College’s six campus centers. Tours of the new facilities will be ongoing throughout the event, and the Dedication Ceremony will commence at 6 p.m. in the Richard C. Call Arena with a reception immediately following. (This event is by invitation only.)

This formal academic ceremony marks a milestone in the life of a college or university. Afternoon classes will be cancelled allowing students, faculty, staff, honored guests and community members to join in the solemn ceremony that recognizes not only the College’s 50th Anniversary but also its promising future with the new facilities, new academic programs and courses, and the forward-thinking student success services. GCC’s last convocation was in 2006 to recognize the College’s 40th Anniversary.

As part of the Historical Horizons lecture series, Pulitzer Prize and Bancroft Prize winning author Dr. Heather Ann Thompson will cap off the College’s special Convocation Day, delivering a presentation, “Blood in the Water: The Attica Prison Uprising of 1971 and its Legacy,” based on her award-winning book. Attica State Prison is part of GCC’s history with inmate education a part of its programming in the 1980s. Dr. Thompson’s book provides a definitive account of the prison uprising in 1971. She utilized sources available to no other researchers to write a reliable tome that upends the myths and exposes cover-ups of that violent event that captured international attention. For a complete listing of the Fall 2017 lecture series go to: https://gcchistoricalhorizons.wordpress.com/.

The two-day event provides fun and festive activities for all with the following schedule featuring the return of some favorite events and a few new opportunities as well. All events are FREE and open to the public unless otherwise indicated.

The GCC community, be they current students, faculty or staff, alumni, retirees or general supporters are all invited to stroll through downtown Batavia making special stops for special treats at various businesses, many owned or operated by GCC alumni. The event kicks off at City Slickers and winds up at TF Brown’s with various stops to businesses such as the YNGoddess, The Hidden Door and Center Street Smokehouse. Cougar Crawl stops are still in development and subject to change. Cost is $15, or 2 for $25.00 and will NOT be sold at the door.

For those who love classic cars, trucks and motorcycles, the popular “Rods and Rock” Car Cruise returns on Saturday in GCC’s north parking lot.

The first music to grace the new Richard C. Call Arena will be from the Genesee Symphony Orchestra, the College’s orchestra-in-residence. Led by Conductor and Music Director S. Shade Zajac, the GSO is presenting a variety of musical selections especially arranged for this one-time event under the theme, “Lollapalooza Golden Gala.” A reception with light refreshments will immediately follow the performance. The concert is free with general admission seating on a first-come, first-served basis.

“September is shaping up to be an exciting month in the life and history of Genesee Community College,” Dr. James M. Sunser, president of GCC said. “We are so grateful to many thousands of people who have positively impacted GCC through the years. From our trustees and donors, to legislators and advisory council members, hardworking students and involved alumni, and of course, our dedicated faculty and staff who make a difference in the lives of our students each and every day—we have been truly blessed with a supportive community that makes our middle name. Next month, we hope to recognize and remember all of you!”