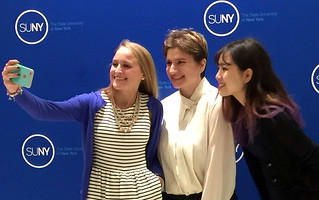 SUNYSelfie_GCC_Chancellor_Awardees
5 years ago ago by Genesee Community College. 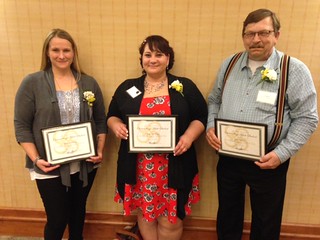 Adult_Student_Honoree2017
5 years ago ago by Genesee Community College. 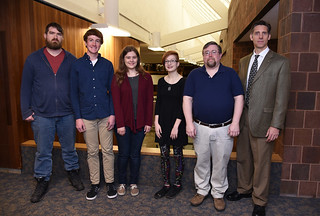 NYSMATYC_Scholarship Winners
5 years ago ago by Genesee Community College. 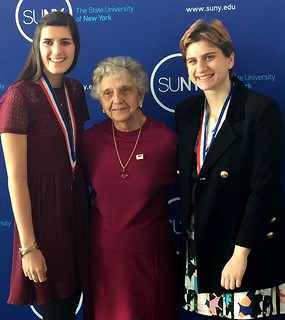 PTK Award_Molisani_Bohm_Bailey2
5 years ago ago by Genesee Community College.

Batavia, NY- Eleven students from Genesee Community College have been recognized in four distinct academic honor programs acknowledging excellence, dedication and exemplary performance while representing an array of different programs, age groups, backgrounds and interests. The collection of honors and student achievers not only reflects GCC’s diverse student population, but signifies the varied academic opportunities as well as the consistency of the College’s supportive faculty in all divisions.

“We commend these hardworking students,” GCC President James Sunser, Ed. D. said. “Their achievements are not limited to the classroom, but extend to areas of leadership and innovation exhibited throughout Genesee Community College and also in many different communities where our students live.”

The State University of New York (SUNY) Chancellor’s Award for Student Excellence was created in 1997 to recognize students who have demonstrated the integration of academic excellence with other aspects of their lives, which may include leadership, campus involvement, athletics, career achievement, community service or creative and performing arts while maintaining a minimum grade point average (GPA) of 3.8. Each year, campus presidents establish a selection committee which reviews exemplary students. Nominees are then forwarded to the SUNY Chancellor’s Office and are subject to a second round of review. Finalists are then recommended and finally approved by the Chancellor to become recipients of the prestigious award.

The following three students, all members of GCC’s signature Fashion Business programs, were among the 256 students named as the 2017 recipients of the SUNY Chancellor’s Award for Student Excellence and Leadership at a reception in Albany on April 5, 2017. Each recipient received a framed certificate and a medallion, which is traditionally worn at all commencement ceremonies.

While carrying an accumulative average of a 4.0 GPA, Julia Bailey of Newark, New York was actively involved in campus life as an orientation leader, board member on GCC Association, and she continues to work in branding and co-producing the College’s annual Fashion Show. As the largest, fashion show in Western New York, this year’s 36th annual event, entitled “Elysium,” is scheduled on Saturday, April 29, 2017 with two shows at 3 and 7 p.m.  Having graduated from GCC in December 2016, Julia has already transferred to FIT and is working toward her bachelor’s in Advertising and Marketing Communication. Additionally, Julia was recognized as a New York State All-Academic Team member with Phi Theta Kappa (see below).

A native of Busan, Korea, Seonggyung Choe, or “Song” as she is commonly called, immersed herself in GCC’s Multicultural Communications Club which is affiliated with Toastmasters International. Not only is she co-president, but she has won several speaking awards and earned a Leadership International Certificate. Her additional involvements include being a member and secretary for GCC’s Phi Theta Kappa Honor Society, she presented at the Global Education’s Experiences Around the World Poster Session and she was certified in Life Bound professional training. As a Fashion Design major, Song is also working hard to help produce the 36th Annual Fashion Show, “Eylsium” with the scene “Fates/Moirai” highlighting Greek deities of Fate.

As a tour guide or phone-a-thon caller, a student ambassador or Cheer Team member, or while campaigning for the United Way, Mariah Paddock has been an integral member of the College community. She is also a member of the Phi Theta Kappa Honor Society, Business Forum Club and works at GCC’s Child Care Center. However, helping market and promote new products that use the newly introduced GCC Tartan plaid is perhaps the experience most relative to her major in Fashion Merchandising. Mariah is a resident of Clyde, New York.

“It is my honor to celebrate the achievements of students who have surpassed SUNY’s highest standards of academic excellence and leadership both on and off campus," SUNY Chancellor Nancy Zimpher said. "Every student we recognize has demonstrated a strong commitment to their degree program, home campus, greater community and much more. Congratulations to all of the students receiving this year’s award.”

The Rochester Area Colleges Continuing Education Association (RACCE) announced that three students from Genesee Community College were recipients of the Outstanding Adult Student Award at its 33rd annual Awards Ceremony and Banquet held at the Hilton Doubletree Hotel in Rochester on April 12, 2017. The Outstanding Adult Student Award recognizes adult students who have excelled academically while successfully combining their college education with other commitments to family, job, career and service to the community. GCC’s Melinda Pitcher, Christi LoTempio and John Burek were among the honorees recognized for their success in balancing college study with their many adult responsibilities.

“The recognition for Melinda, Christi and John is very well-deserved,” Cliff Scutella, GCC director of Student Activities said. “Their dedication and hard work to excelling in school and life is exactly what this award is about.”

NYSMATYC has over 50 member schools, and the Scholarship Committee received 24 applications. GCC students earned four of the ten total scholarships awarded. The scholarships will be used by students as they transfer to four-year institutions to earn higher level degrees in mathematics. All applicants must have completed one year of Calculus I or II, at least a 3.5 GPA in mathematics courses, and at least a 3.3 GPA overall. Students interested in mathematics education are especially encouraged to apply. For further information go to: https://www.nysmatyc.org/scholarships/

Each year, Phi Theta Kappa (PTK), the International Honor Society for two-year colleges sponsors the All-State Community College Academic Team with 38 states participating from across the nation. The scholastic program honors outstanding students through a competitive application process that includes a comprehensive essay revealing how each team member has immersed themselves in their community to have a positive impact. This year, the following two GCC students placed in the PTK/NYS Academic Team.

As indicated above, Julia completed her Fashion Business major at GCC last semester with high honors that also earned her a SUNY Chancellor’s Award for Student Excellence. She is now studying at FIT working toward her bachelor’s in Advertising and Marketing Communication.

While carrying a near perfect cumulative average at GCC, Megan has also served as a resident assistant at College Village, earned a Citizenship Scholarship, the Pepsi Scholarship, volunteered her time in the Child’s Center Day Care and been involved in many campus events, such as being a model in the 2016 Fashion Show. She works extensively in the Marketing Communications Office, and contributes to all aspects of the vibrant culture of the College. She is a resident of Clyde, NY and has already been accepted at St. John Fisher College with life-long plans to be an inspiring and motivating teacher to children.

GCC's local chapter of Phi Theta Kappa, Alpha Iota Upsilon, has a rich history as an active chapter and has been listed among the Top 100 Chapters internationally. To be inducted into the honor society, a student must have completed 12 credit hours of associate degree coursework at GCC with at least a 3.6 GPA, and also adhere to the school conduct code while illustrating leadership qualities. The chapter has nearly 200 current members and over 3,000 alumni. Alpha Iota Upsilon was chartered on February 15, 1985.

Photographs of students and supporters from various award ceremonies are available at the respective links below: