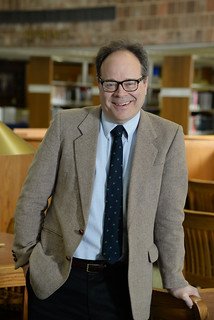 Bill_Kauffman2017
5 years ago ago by Genesee Community College.

Batavia, NY- Genesee Community College is pleased to announce that Bill Kauffman will help congratulate and send off the College’s 49th graduating class on Sunday, May 21, 2017, when the homegrown political writer serves as the commencement speaker for the event. Kauffman’s selection was announced at the Board of Trustees’ monthly meeting earlier this month. The ceremony will take place in the College’s Anthony T. Zambito Gymnasium and will begin at approximately 1 p.m.

Born and raised in Batavia, Bill has been a regular contributor to the Wall Street Journal and also written for publications such as The American Conservative, The American Scholar, the Los Angeles Times Book Review, The Nation, New York History, Newsday, The Australian and The Spectator of London. Kauffman has authored 10 books, including Look Homeward, America: In Search of Reactionary Radicals and Front-Port Anarchists, which the American Library Association named one of the best books of 2006 and won the Andrew Eiseman Writers Award. His book, Ain’t My America, The Long Noble History of Antiwar Conservatism and Middle American Anti-Imperialism was named by Barnes & Noble as one of the best books of 2008. Locally, he is probably best known for his Dispatches from the Muckdog Gazette: A Mostly Affectionate Account of a Small Town’s Fight to Survive (2003), the story of Batavia and its changing fortunes.

He is profiled in Who’s Who in America and Contemporary Authors and his screenplay adaptation of Harold Fredric’s novella, The Copperhead, was filmed in King’s Landing, New Brunswick, Canada, and visited theatres in 2013. The DVD was released in 2014 and more information is available at www.copperheadthemovie.com.

While his political views may be difficult to categorize, Kauffman is critical of development and often writes approvingly of distributism and agrarianism, and is strongly anti-corporate. He has described his politics as “a blend of Catholic Worker, Old Right libertarian, Yorker transcendentalist, and delirious localist,” and considers himself an independent as well as a “a peace-loving football fan.” Bill has lectured or given readings at many schools, including Alfred University, Brown University, Georgetown University, Marquette University, the University of Louisville, Utica College and Wellesley College.

A familiar face in the local community, Bill is vice president of the Genesee County Baseball Club which owns the Batavia Muckdogs of the New York-Penn Baseball league. He can be found at Muckdogs’ games during the summer months along the third baseline at Dwyer Stadium. Bill earned a bachelor’s degree from the University of Rochester before joining the staff of Senator Daniel Patrick Moynihan in the U.S. Senate. After leaving Moynihan’s team for the west coast, Kauffman relocated back to Batavia from California in 1988 with his wife, Lucine. The couple now resides in Elba and has one daughter, Gretel.

The College anticipates recognizing over 800 students at commencement, including those completing programs of study in August 2016, January 2017, May 2017 and the anticipated graduates in August 2017. Approximately 220 graduates with their families will be participating in May 21 ceremony.

While the event is open to the public, seats in the gymnasium are reserved for family and friends of graduates. The ceremony will be streamed live on monitors across the Batavia campus and also around the globe. To view the live streaming, just go to the GCC website www.genesee.edu and click on the Live Streaming link directly from the homepage.

Immediately following commencement, a reception with punch and light refreshments will be hosted in the William S. Stuart Forum for all guests and graduates.

The college is also offering free child care services during commencement for children eight weeks to five years of age. Please sign your children up in the Student Activities office or call 585-343-0055 ext. 6261.

Editor’s note: There will be a pre-Commencement Media Hour at 12:00 noon introducing members of the media to a handful of graduating Genesee students, whose achievements represent some of the College’s best and brightest.

For a photograph of Bill Kauffman go to: