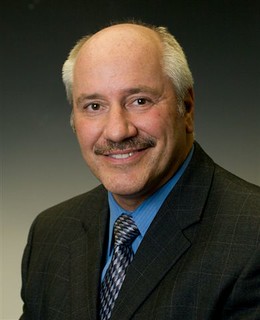 Dr. James Sunser
12 years ago ago by Genesee Community College.

Batavia, NY – In sports, it’s the MVP or most valuable player. In journalism and the arts, it’s a Pulitzer Prize. Film has its Oscars and Academy Awards, and television has the Emmy Awards. But in the serious business of higher education, standards of excellence and adherence to quality are gauged by the Commission on Higher Education, a voluntary, non-government, regional membership association that assures institutional accountability, improvement and innovation through a rigorous application of standards within a peer reviewed process.

Dr. James M. Sunser, president of Genesee Community College, was recently appointed as one of 26 commissioners (board members) of the Middle States Commission on Higher Education (MSCHE), which oversees 530 colleges and universities within New York State, as well as Delaware, Maryland, New Jersey Pennsylvania, the District of Columbia, Puerto Rico and the Virgin Islands. He was selected from 85 nominations for just three open seats, and he is one of the few community college presidents to serve as commissioner.

MSCHE is recognized by the U.S. Secretary of Education and the Council on Higher Education Accreditation to accredit degree-granting institutions which offer one or more post-secondary educational programs of at least one academic year. Dr. Sunser joins the team of academic leaders who help define, maintain and promote educational excellence across many institutions with diverse missions, student populations and resources. Prior to his appointment as a commissioner, he served as a chairman or a member of an evaluation team within the peer-review process on more than a dozen occasions over the past 20 years.

To earn and retain accreditation through MSCHE, each institution of higher education undergoes a multi-stage accreditation review process every ten years that begins with an intensive self-study. The institution appoints a steering committee and working groups, and organizes campus-wide discussions to prepare a comprehensive Self-Study Report focused on specific accreditation standards. The Report also helps frame the three-day site visit by an assigned evaluation team made up of members from peer institutions.

After careful review of the Self-Study Report and numerous on-campus interviews, the evaluation team chair compiles an Evaluation Report summarizing the team’s overall findings. In the end, the commissioners of MSCHE can affirm accreditation, require follow-up action, or remove accreditation.

Ironically, Genesee Community College is currently undergoing its decennial evaluation and is in the final stages of completing its 150+ page Self-Study Report with its MSCHE site visit scheduled April 2-5, 2017. (To avoid all conflicts of interest, the commissioners recluse themselves from all discussions involving their own institutions of employment.)

President Sunser is a native of Syracuse and has spent the majority of his professional career in higher education. He is a graduate of Onondaga Community College, earned his BS degree from Syracuse University, an MS from SUNY College at Brockport, and a Certificate of Advanced Study and his Ed.D. Degree from the University of Rochester. He came to GCC in 2011, after working at Onondaga Community College in several capacities including as the bursar and vice president for finance, and vice president for continuing and extended learning.

“I am truly honored to be a part of such an important organization within higher education,” President Sunser said of his new appointment. “Accreditation is the lynch pin that holds higher education together. From setting policy to the self-assessments, team reviews during on-site visits, Middle States has imparted leadership in higher ed throughout its nearly 100-year history.”

For a photograph of GCC President James M. Sunser go to: