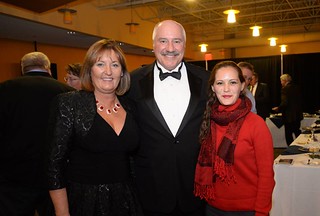 President_Mrs_Sunser_EHelenbrook
5 years ago ago by Genesee Community College. 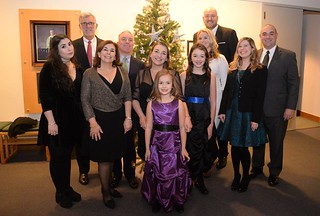 Encore_2016_Family_CoChairs
5 years ago ago by Genesee Community College.

Batavia, New York — A sell-out crowd of 320 guests enjoyed a celebratory night at Encore 2016 last week, Genesee Community College Foundation’s annual holiday fundraising event featuring a holiday concert by the Buffalo Philharmonic Orchestra. The December 13th celebration continued the long-standing tradition of a fun and festive evening with new and old friends coming together in the spirit of raising funds for the College’s numerous scholarship programs. More than $50,000 was raised.

Following the theme, ‘A Star Shines On,’ the event recognized both the 25th Anniversary of Encore together with the Genesee Community College’s 50th Anniversary. This year, Encore was organized by a chairing committee featuring the two sisters who organized the first of the Encore events in 1991, and their multi-generational families. The co-chairs included Glenn and Rosalie Maguire Simon, joined by Rosalie’s sister, Lucy Barnett and her husband Timothy; daughter Jessica Maguire Tomidy and her husband, Alan; as well as son, Andrew Maguire and his fiancée, Jamie Beswick. In addition, Encore included special programming just for children the first time this year, allowing the children and grandchildren to attend as well.

“Planning the first Encore is a very fond memory for me and my sister Lucy. We were delighted to bring in the next generation for this significant milestone and also give children a chance to experience the arts and this incredible event,” Rosalie Maguire Simon said. “We specifically revisited the theme from 25 years ago, ‘A Star Shines,’ and featured the star logo and artwork designed by GCC’s late art instructor, Michael Powers from many years ago.”

The evening featured four segments: the Prelude in the Genesee Center for the Arts; Dinner with numerous food stations set up in the central William W. Stuart Forum; the BPO concert in the Stuart Steiner Theatre featuring soprano soloist Emily Helenbrook; and finally desserts in the Wolcott J. Humphrey III Student Union.

The Genesee Community College Foundation is a charitable organization dedicated to providing volunteer and philanthropic support to Genesee Community College. Formed in 1986, the Foundation has been instrumental in providing thousands of scholarships over the last decade, and assisting with the funding of numerous capital projects including the Student Success Center and the Richard C. Call Arena currently under construction and scheduled to open in the summer of 2017 at GCC’s Batavia Campus. The Foundation also supported the construction of the Conable Technology Building, the Humphrey Student Union, and the expansion of College Village, Genesee’s student residence.

For a photograph featuring the co-chairing committee go to: http://marketing.genesee.edu/images/Encore_2016_Family_CoChairs.jpg

For a photograph featuring President and Mrs. Sunser with solo soprano Emily Helenbrook go to:

Numerous photographs of Encore 2016 can be viewed by visiting the Colleges’ Facebook page at www.facebook.com/sunygcc

For a direct link to the Encore 2016 Facebook photo album go to: