Now in its fourth year, Genesee Community College and the Orleans Hub are proud to continue the Orleans County Heritage Heroes Awards which recognize the dedication and hard work of dedicated citizens who strive to protect and preserve local history.
Monday, December 5, 2016 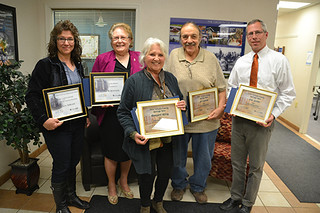 Batavia, New York — Now in its fourth year, Genesee Community College and the Orleans Hub are proud to continue the Orleans County Heritage Heroes Awards which recognize the dedication and hard work of dedicated citizens who strive to protect and preserve local history. They are now seeking nominations for the awards. Nominations will be accepted through February 17, 2017.

“The people of Orleans County are remarkable for the great pride they have in their heritage,” said Jim Simon, associate dean of GCC’s Orleans County Campus Centers in Medina and Albion. “For our fourth consecutive year, we want to continue to recognize the time and investment of individuals who are tireless advocates for local history.”

Three winners were honored last year including Tim Archer, Margaret Wiley and Al Capurso (see provided photo). Because nominations are not retained for future consideration, nominees not selected to receive awards in previous years are encouraged to re-submit a nomination again for this coming year.

In addition to the three Heritage Heroes, two others were honored at the 2016 awards ceremony.  Delia Robinson was the recipient of the Robert A. Waters Award for Lifetime Achievement and Melissa Ierlan was presented the C.W. “Bill” Lattin Award for Excellence in Municipal History.

“Many residents from all over the county work hard on restoring historic houses and protecting other community assets, including museums and churches,” said Tom Rivers, Orleans Hub editor. “The dedicated people working to preserve these treasures deserve praise for adding to the quality of life and character of our community.”

To nominate someone for the Heritage Heroes Awards, write up a brief statement outlining the person’s contributions, projects and community affiliations. Anyone sending in a nomination should provide their name (anonymous nomination packages will not be accepted), address, phone number and email address. The more in-depth the detail provided in the nomination, the stronger the submission. Submit the nomination to:

A screening committee made up of community members, history professionals and GCC students will review the nominations and select finalists. From those finalists, a committee including GCC Associate Dean Jim Simon, Associate Professor Derek Maxfield and Orleans Hub Editor Tom Rivers will choose the Heritage Heroes.

“I cannot tell you how proud I am of the Heritage Heroes Awards,” Prof. Maxfield exclaimed, “The awards ceremony is the highlight of my year.  Recognizing real life heroes – unsung heroes – who work so hard to make sure local history survives into the next generations is vitally important.”

The Heritage Heroes will be recognized during a ceremony at Genesee Community College in Medina in April 2017.

For a photograph from the 2016 Orleans Heritage Heroes honorees go to: