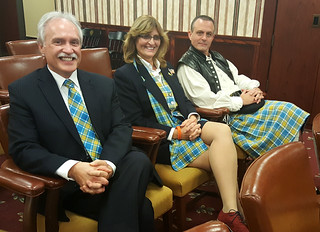 GCC_Faculty_GCCTartan2
5 years ago ago by Genesee Community College. 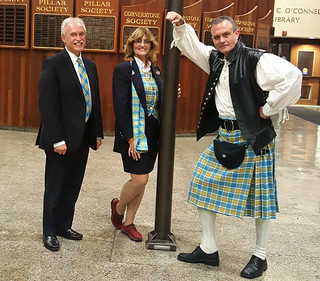 GCC_Faculty_GCCTartan1
5 years ago ago by Genesee Community College.

Batavia, New York — Genesee Community College trustees recently learned that the students and alumni of the Fashion Design and Business program are once again covering new territory. By developing a unique plaid design, they are reinforcing the College’s brand and amplifying the ongoing 50th Anniversary celebration and providing students with new design challenges and business opportunities.

Under the leadership of Professor Donna Ehrhart, whose has taught computer, business, marketing and now Fashion Design courses at GCC for 28 years, establishing the College’s unique plaid pattern began with a design competition back in 2014 that was open to all GCC students and alumni. Michael Moultrup, GCC class of 1999 and 2011 with degrees in both Human Services and Digital Arts, submitted the winning entry. From there, Professor Ehrhart submitted the new GCC pattern, with its very specific thread count and branded GCC colors, to be officially registered as a Scottish Tartan and also officially trademarked.

After these major accomplishments, fashion design students and Professor Ehrhart got busy with new product developments. To date, the official GCC plaid is now on silk scarves, neck and bow ties, as well as tube socks and t-shirts. In addition, a limited number of vests are being produced, a formal display case was developed in the Alfred C. O’Connell Library, a new website is in development and followers are encouraged to add hashtag #GCCplaid to their Twitter account.

“We are one of the very few community colleges in the nation to have our own plaid design, now officially registered in Scotland, designed by alumni and project managed by our students,” Professor Ehrhart told the College Trustees. “The whole project not only reinforces the College’s ‘beyond expectations’ brand, but also adds another great dimension to our Anniversary celebration.”

In other business last Monday evening, the Board of Trustees:

Editor’s Note: For a photograph of three GCC professors presenting the GCC Tartan to the Board of Trustees on Nov. 14, 2016 please go to:

Left to right, in each photo are professors: Rick Dudkowski, Donna Ehrhart and Tracy Ford.