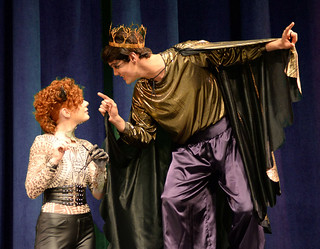 Shakespeare_Midsummer1
5 years ago ago by Genesee Community College.

Batavia, NY- The Stuart Steiner Theatre at Genesee Community College will soon transform into mythical Athens and an enchanted forest. Audience members will meet a handsome fairy king, misguided father, star-crossed lovers, a weaver who’s transformed into a half-donkey, wood sprites and elves. Widely performed around the world, and no wonder – it’s about the world’s most popular pastime, falling in love. William Shakespeare’s A Midsummer Night’s Dream is his most popular comedy, and in December, the community is invited to find out why.

The GCC Forum Players will bring William Shakespeare’s A Midsummer Night’s Dream to the stage with shows on Thursday, Friday and Saturday, December 1 – 3, 2016 at 7:30 p.m. and again on Sunday, December 4, 2016 for a 2 p.m. matinee. As one of Shakespeare’s most enduring comedies, “Midsummer,” written around 1594 or 1595, portrays adventures of lovers and fairies, commoners and aristocrats, and those who would try to arrange everybody’s lives. “The course of love never did run smooth,” is a Shakespearean quote that sums up the show quite succinctly. The cast, made up of GCC students, includes the following:

Tickets for all shows are $8 for general admission; $5 for GCC Faculty/Staff, Seniors 55+ and Students 16+; $3 for GCC students; and GCC alumni receive a $2 discount. For ticket reservations or general information, contact the Genesee Center for the Arts box office at (585) 345-6814 or via email: boxoffice@genesee.edu. Information can also be found online at www.genesee.edu/campuslife/arts or www.facebook.com/GCCTheatre.

For two photos of the performers in A Midsummer Night’s Dream go to:

Puck, on the left, played by Alannah Gross from East Bethany, NY

Oberon, on the right, played by Pedro Pires de Araujo from Brazil

Queen Titania played by Adrienne Huggins from the Bronx

John's true passion was being on stage, and acting for other’s pleasure with his gift. He was ready to relocate to New York City on January 5, 2014. Tragically, on December 22, 2013, he lost his life in a head-on collision during an ice storm at age 29.

Before the Saturday, December 3, 2016 performance of A Midsummer Night’s Dream, the GCC Forum Players will be presenting his mother, Kathie Sheridan, with a plaque honoring Johnny’s life, and his gift and talent in the performing arts.

Editor’s Note: For images of Johnny Dow performing at Genesee Community College with the Forum Players go to:

Johnny Dow is on the left:

Johnny Dow is on the right: