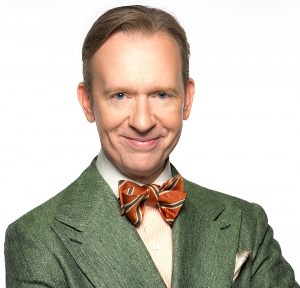 David Zyla
5 years ago ago by Genesee Community College.

Batavia, NY- His style is authentic and colorful. His fashion is Emmy Award-winning. His books have influenced followers all over the world to adopt his unique approach, and on Wednesday, October 26, 2016, he will return to GCC as part of the Fashion Business Program’s Fashion Speaker Series to give a presentation that will show exactly why he is a sought after authority on fashion and color in the media.

David Zyla, who spoke as part of the Series in 2014, has collaborated with some of the most recognizable faces of contemporary culture, including Neil Patrick Harris, Hillary Clinton, Susan Lucci, Tom Hanks, Carol Burnett, Amber Rose and Kelsey Grammar. A believer that “every person has the right to feel empowered and look fantastic,” Zyla’s lifelong passion is helping people discover their individual palette of flattering colors and unique style – the best version of themselves – through private and group style consultations all over the world.

Zyla started his Seventh Avenue evening wear label, which was featured at New York’s Fashion Week and sold by luxury retailers, including Bergdorf Goodman and Henri Bendel, at the age of 22. By 2001, he had already earned a reputation as a tastemaker with strong ties to the global fashion community and was recruited by ABC to reinvigorate the visual quality of its daytime programming. David has held position of head costume designer for various long-running television shows, including ABC’s All My Children (2010 Outstanding Achievement in Costume Design Emmy Award), General Hospital, and Lifetime’s Devious Maids.

A guest speaker, panelist and lecturer on the transformative power of color and its application to wardrobe, home and lifestyle, Zyla is known for his engaging, educational and fun presentations on fashion. He has been profiled in People magazine and The New Yorker, and featured in publications including Life & Style, More Magazine, Real Simple, Women’s Wear Daily, The Huffington Post, USA Today, Good Housekeeping, Redbook, Cosmopolitan, Traditional Home, and more. David often serves as a teacher and guest lecturer at major design institutions, museums, and schools, including New York University, Hofstra University, SCAD, LIM, Otterbein College and UC Davis. He is a faculty member at Marymount Manhattan College where he teaches a regular course on Fashion, History and Society.

Don’t miss David Zyla at GCC on Wednesday, October 26, 2016 in room T102 of the Conable Technology Building at the GCC Batavia Campus as part of the Fashion Business Program Speaker Series. The event is free and open to the public, however, seating will be limited. Those wishing to attend can RSVP by calling (585) 345-6830.