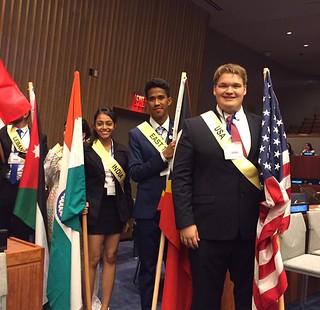 Savio2_HumanRightsSummit
5 years ago ago by Genesee Community College.

Batavia, NY- Youth for Human Rights International (YHRI) has a simple hope; someday universal human rights will be a fact, not just an idealistic dream. In order to achieve its mission, YHRI, a non-profit organization teaches youth about human rights and uses both classrooms and nontraditional educational settings such as the annual Human Rights Summit. Hosted at the United Nations in New York City on August 25 – 26, 2016, the 13th annual International Human Rights Summit invited some of the brightest young men and women from across the country. Representing countries from across the globe, the Summit focused on bringing an end to human trafficking, police brutality, bullying, poverty, war and gang violence. Among the 72 activists working toward the goal were GCC’s Arsenio Ferreira and Jorguino Savio, international students from the Southeast Asian island nation of Timor-Leste who are finishing up their associate degrees in Food Processing Technology.

Award-winning film maker Ronald Lang emceed the event and made it clear that human rights violations are not just a problem in developing countries. “Human trafficking happens all over the world,” Lang said. “Even in my own backyard here in New York, and we need to put an end to it.”

Youth delegates presented their work to their peers and to the 400 attending guests, and they heard from human rights luminaries including six ambassadors and representatives from permanent missions to the United Nations.

“Our efforts are working. Now, many of the over 300,000 young people who were causing the problem have become human rights defenders in East-Timor,” Savio added. “Our team continues to reach out to parents, preaching that education is not just for men, but for everyone.”

Augustine Brian, Papua New Guinea Southern Highlands provincial project coordinator of World Vision and director of Youth for Human Rights Papua New Guinea, addressed the Summit with a message of hope and vision. A victim of police brutality himself, Mr. Brian discovered Youth for Human Rights online, adopted the program and has taken it throughout his province. He has now educated and partnered with the very police force that perpetrated his assault, and together they are helping to ensure fair treatment of the people throughout their district.

YHRI is the youth component of United for Human Rights founded in 2001 in Los Angeles. There are now more than 100 YHRI chapters around the world and their award-winning educational materials are available in 27 languages, bringing the message of human rights to 195 nations. For more information on the YHRI, including the annual International Human Rights Summit, visit www.youthforhumanrights.org.

For a photograph of Arsenio Ferreira (second from left) with other activists from the Human Rights Summit go to:  http://marketing.genesee.edu/images/Human_Right_Summit1.jpg

For a photograph of Jorguino Savio (center) with other activists from the Human Rights Summit go to:

For a photograph of Jorguino Savio in New York City go to: