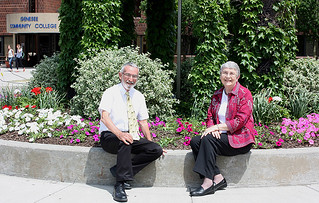 Larry_Barnes_Ruth_Andes
5 years ago ago by Genesee Community College.

Batavia, NY- Back in the early days of Genesee Community College, faculty members Larry D. Barnes and Ruth E. Andes helped develop and expand the ever-growing curriculum, occasionally communicating through the “Pony Express” as summer travel plans would interrupt their work flow. From many a phone booth, psychology instructor Barnes would call sociology instructor Andes and tell her which U. S. Post Office she should mail academic materials so he could pick up their work-in-progress as he travelled throughout the country on his summer vacation.

As co-authors of the just published “Genesee Community College: The First 50 Years,” Barnes and Andes remark how drastically different their communication efforts are today compared to their earliest team efforts of the 1970s. From mailing to emailing, calling to Skyping, communication has changed through the years, not unlike the ways of educating students—which is captured in their new book just released under the Campus History Series of Arcadia Publishing.  The pair of old friends and faculty emeriti have nearly 100 years of combined service to the College and when asked to write a book about GCC, they could hardly refuse.

“We consider ourselves lucky to be a part of the College since the very beginning,” Barnes said. “It’s a privilege to work with Ruth again, and be able to combine our collective memory to tell the story of GCC, and illustrate its long-standing benefit to the community. From the old days of Valu Tech to becoming  one of the country’s finest community colleges—we have been honored to be part of GCC’s fabled history and now we are honored to tell its story through our new book.”

Barnes and Andes will formally present their book to the public on Saturday, September 24, 2016 at 3 p.m. in the Conable Technology Building, room T102 during Fall Fest – Cougar Weekend at GCC’s Batavia campus. They will share a short synopsis of each of the nine chapters covering the College’s 50 year history, and also introduce a few amusing stories not covered in the book. Additionally, they will invite members of the audience to share memories, and finally they will autograph books during a post-presentation reception with refreshments in the south lobby of the Conable Technology Building.

The event is free and books will be available for purchase for $21.99. Copies can also be purchased online through Amazon and at local bookstores, including the College Bookstore.

Founded in 1966, GCC is the product of a grassroots movement that culminated in a public referendum supporting the creation of a community college. Today, the College boasts a population of approximately 6,500 students, more than 60 programs of study and seven campus locations in Genesee, Livingston, Orleans and Wyoming Counties. Barnes and Andes served on the faculty from approximately 1968 to 2014, participating and actively supporting the growth of GCC from its earliest years to the present. Together, they share the dynamic achievements of GCC through 128 pages and more than 200 photographs, alongside their first-hand experience of collectively teaching more than 16,000 students.

Arcadia Publishing printed the paperback in its The Campus History Series, a collection of volumes that showcase American colleges, schools and educational institutions of all types from all over the country. Tulane University, Shepherd University, The Art Institute of Pittsburgh, The College at Brockport, Furman University, Kutztown University and many more are part of the collection.

“Genesee Community College: The First 50 Years” is just one of the many ways to celebrate the College’s special milestone 50th Anniversary during the Fall Fest – Cougar Weekend, scheduled for September 23 – 24, 2016. In addition to the Book Release presentation, Fall-Fest kicks off with the second annual Cougar Crawl on Friday, September 23 at 5 p.m. with a walk through downtown Batavia and nine fun stops along route to TF Browns where the alumni bash is scheduled. On Saturday, September 24, a full day of activities at the Batavia campus features the annual Rods and Rock Car and Bike Cruise, Family Fun in the Cougar Den, a Craft and Vendor Market, numerous athletic games and the Award Ceremony for GCC’s National Champions Men’s Lacrosse Team. For the complete Fall-Fest Cougar Weekend schedule go to: http://www.genesee.edu/home/offices/alumni/fall-fest/

To keep up with all of GCC’s 50th Anniversary events and opportunities, go to the specially established Anniversary website at http://sunygcc50.genesee.edu/ . With an events calendar, 50 Points of Cougar Pride, and an Online Scrapbook, it is the central location for the College’s Golden Celebration that will continue into 2017 when GCC’s opens its two new facilities, the Student Success Center and the Richard C. Call Arena. The website is also easily accessible from the College’s main homepage, www.genesee.edu, by clicking on the Anniversary “widget” on the lower right portion of the page. A second book signing presentation will be held at the Holland Land Office Museum on Friday, September 30, 2016 at 7 p.m.

For a photograph of Larry Barnes and Ruth Andes go to: