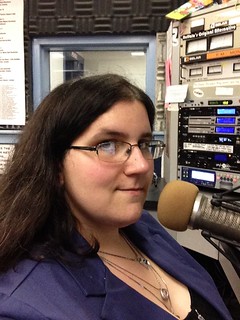 Joan_Nobile_at_the_mike
5 years ago ago by Genesee Community College.

Batavia, NY- In an industry dominated by men, Joan Nobile is a gamer. The ever-growing world of video games creates endless possibilities with characters, story lines and even new worlds to explore, but to Nobile and many other female gamers, is also very one-sided in its portrayal of men and women.

“The ways in which women are portrayed in video games tends to be troublesome. There's a trend of many female characters being scantily clad, or seen as sexual objects,” Nobile, a GCC alumnus said.

“Women who game, and women involved in the gaming industry, often receive a great deal of harassment. The message this sends to women and men alike has the potential to influence our culture and society in similar ways to television and film, which is why it's important to critically analyze games.”

Nobile decided to explore the gender differences in video games in the form of a thesis requirement while completing her undergraduate studies at Buffalo State College, and eventually turned her efforts into a documentary she titled, “The Gender Glitch.” The documentary features interviews with knowledgeable and passionate gamers about the crossover of gender, harassment and gaming, and includes a sit-down with Dr. Jennifer Jenson of York University, a leader in the field of gender and games. Nobile’s hard work earned her recognition from SUNYWide Film Festival (SWFF), which awarded her Honorable Mention in the Documentary category at its 2016 festival.

“I was really amazed,” Noble said of the recognition for her award-winning film, which wasn’t entirely met with positive feedback. Her critics responded with severe harassment and gender-based slurs, which caused her to temporarily remove the video from public view. Nobile has since made the video available on YouTube unlisted and comments require approval before being posted.

The SUNYWide Film Festival launched in 2009 as an opportunity to showcase the cinematic work of students and faculty from the SUNY system. A result of a vision by Phil Hastings, associate professor of Film and Video Arts at SUNY Fredonia, the festival celebrated its seventh annual gathering on the campus of SUNY Oswego on April 8 – 9, 2016, and was co-hosted by SUNY Stony Brook. A total of 192 entries were submitted this year, with awards given out for the categories of Grand Jury Prize, Audience Choice, Animation, Documentary, Experimental and Fiction.

Originally from Brooklyn, Nobile came to GCC after chatting with a Batavia-based friend online. After exploring the College’s website, she realized it had all the things she wanted: a student housing community, a radio station and affordability. She made the most of her time at the Genesee, DJ’ing for the College’s radio station, 90.7 WGCC, serving as the president of New Age Circle, holding the role of resident assistant at College Village, and also was a member of the Anime Club. In 2013 Nobile transferred her GCC experience and academic credits to continue her education at Buffalo State College where she earned her Bachelor’s degree in Media Production in 2015.

Joan currently works as on-air host at WNED for Afternoon Classics on Saturdays, and does fill-in programming as requested. She also does freelance sound work. She is engaged to fiancé Josh and the two have plans to be married in December, 2017.

For more information on the documentary, visit The Gender Glitch Facebook page at https://www.facebook.com/genderglitch/.

Viewing Nobile’s documentary film, “The Gender Glitch” (Festival Cut) is now available on YouTube but comes with full warning concerning the rough language and profanity that is pervasive due to the subject matter. https://www.youtube.com/watch?v=LsamaBtwDfc.

For a picture of Joan Nobile working at the microphone go to: