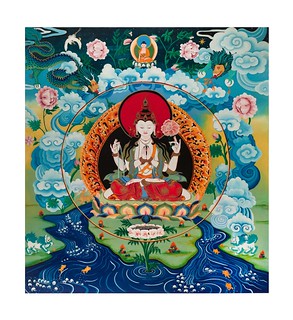 ijage
5 years ago ago by Genesee Community College.

Batavia, NY- The schedule is now in place for artists and exhibits that will be featured in the Rosalie “Roz” Steiner Art Gallery this fall at Genesee Community College, and Thangka artist Joanna Angie will display her works from August 22 – September 24, 2016 to begin the season.

Evident in her artwork, Angie has a strong sense of connection to Tibetan spiritual practice. Through Thangka, a traditional Tibetan form of religious art dating back to the eleventh century, Joanna seeks to convey images of compassion, community and knowledge.

“What I found in the Tibetan spiritual practice and Thangka paintings was a natural sense of connection,” Angie said. “The images stand for qualities we can develop such as compassion, community and knowledge, knowing there was no good judging me, just cause and effect.”

Angie is the daughter of an Italian immigrant who escaped Mussolini’s wrath and was proud of his American citizenship. After her father’s death when she was just 14 years old, faith slowly came to her and school teachers and college professors became new guides in her life. After graduating Bennett College, Joanna opened a gourmet food business, but became very sick by the age of 28. Relocation to Massachusetts exposed her to a Tibetan healer and a hatha yoga teacher, giving her new opportunities to heal and figured immensely into her healing process.

As a community-engaged artist, Joanna has worked on numerous projects including the public art project to commemorate the Centennial of the Pan-American Exposition in 2001. She was an active member of the Community Outreach Committee for the 2006 visit to Buffalo by His Holiness, the Dalai Lama and in 2005, 2007 and 2010; she was an active participant in Beyond/In WNY Exhibitions, collaboration between visual arts organizations in the Western New York Region. Her mural commissions include work at Carnegie Hall Towers and William Hurt’s residence in New York City and at St. Paul’s Cathedral and The Buffalo Club in Buffalo.

In addition to its aesthetic beauty as a work of art, Thangka serves as an object of devotion, an aid to spiritual practice, and a source of blessings to those who meditate upon it. Joanna’s exhibition Mediation will be shown August 22 – September 24, 2016 and an opening reception is planned for September 8, 2016 beginning at 1 p.m. The exhibition will close with a reception on September 24, 2016 beginning at 1 p.m. during GCC’s Homecoming festivities.

The Roz Steiner Art Gallery will continue to host natural and historical works through the fall with the following exhibits:

Gallery hours are Monday-Friday 10 a.m. – 2 p.m. For more information on all upcoming events at the Roz Steiner Art Gallery visit www.genesee.edu/gallery or www.facebook.com/gccgallery.

For an image of Joanna Angie’s artwork go to: