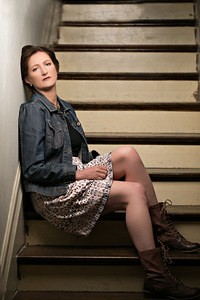 louise_wareham
6 years ago ago by Genesee Community College.

Award-winning writer Louise Wareham Leonard will give a reading at Genesee Community College this Wednesday, May 4, 2016 from 12:20 - 1:15 p.m. in room T-203 of the Conable Technology Building. The event is free and open to the public. Interested attendees are asked to RSVP with JoNelle Toriseva, GCC director of English, Communications and Media Arts by emailing: jrtoriseva@genesee.edu.

Louise Wareham Leonard’s first novel Since You Ask was released in 2004, and was published in New Zealand, Australia and the United States. It received the James Jones Literary Society First Novel Award. Wareham Leonard has also been shortlisted for the Prize in Modern Letters. Her second novel, Miss Me A Lot Of, was published in 2007 and became a bestseller in New Zealand. Her latest collection, 52 Men, was published by Red Hen Press last fall. She has also published in literary journals, including Poetry and The Rumpus, including the recent “How to Date a Writer” which can be reviewed online at: http://therumpus.net/2015/09/funny-women-132-how-to-date-a-writer/

Born in Wellington, New Zealand, Wareham Leonard immigrated to New York City, where she attended Dalton School and the United Nations International School. She graduated from Columbia in New York with a degree in Comparative Literature and Society. At Columbia, she was awarded the Andrew D. Fried Memorial Prize for excellence in critical and creative writing. She represented Columbia in the Glascock Intercollegiate Poetry Contest. Along with New York and New Zealand, she has lived and worked in Mississippi, Europe, the Caribbean and the outback in Western Australia.

Living internationally features in her writing, and Wareham Leonard reflects on her unique ancestry and heritage. She states: “New Zealand has a strong, strong pull for me. We drove all over both islands when I was a girl, staying at motels with hot swimming pools and Maori dances, visiting the pancake rocks and Mt. Cook and Franz Josef Glacier. I have come back from New York several times as an adult to live for extended periods in Wellington, and always ended up in Paekakariki. Turns out I have ancestors there and around Whanganui, and recent revelations around that have made my visceral attachment to New Zealand make more sense. It’s something powerful and unexpected, a draw to the intensity and stunning beauty. I have a good mind to come back and live in a campervan in Northland sometime. On the other hand, my education was mostly Northeastern American and that, as well as being turned inside out – from a quiet reserved NZ girl to an outspoken New Yorker – has formed my personality and my sensibilities as a writer. It’s an odd mix. I have often felt flung out into the world, but now I realize I actually have ties.”

JoNelle Toriseva, director of English, Communications and Media Arts, knows Wareham Leonard through their work on the literary publication, Tin House, where work is reviewed and considered for inclusion in the magazine.