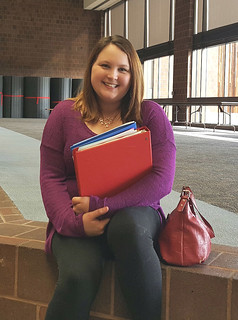 Sheets_Rebecca
5 years ago ago by Genesee Community College.

Batavia, NY- The New York State Mathematics Association of Two-Year Colleges (NYSMATYC) held its 49th Annual Conference in Kingston, NY on April 8-10, 2016, hosting professionals from throughout New York state for a three-day event themed, “Three Days of Peace and Math.” Among the order of business was the presentation of the organization’s scholarship awards, which honor high achieving students at two-year colleges across the state. Genesee Community College is pleased to congratulate student Rebecca “Becca” Sheets of Batavia who was awarded the coveted Helen Siner Scholarship Award, reserved as the NYSMATYC’s highest honor.

“I recommended Becca for the award because she has been one of the strongest students in Calculus III, Discrete Math and Differential Equations this year,” said Phillip Pickering, GCC professor of mathematics. “They are the three hardest mathematics courses currently offered at GCC. She has no shortage of supporters among the math and science faculty, and all of us who have had the pleasure of having her in class are equally impressed with her work ethic, attitude, personality and intelligence.”

Helen Siner taught mathematics at Staten Island Community College, which later became the College of Staten Island, a four-year City University of New York (CUNY) unit. In 1975, Helen was honored by NYSMATYC for Outstanding Contributions to Mathematics Education. During the 1970’s and 1980’s, Helen chaired the Scholarship Committee almost continuously. After her death in the early 1990’s, the top NYSMATYC Scholarship was named in her honor, which includes a $1,000 incentive.

A 2010 graduate of Batavia High School, Becca is a double major at GCC, studying Mathematics and Chemistry. She served in the United States Air Force from 2011 until 2014 as an Air Traffic Controller and spent time in Texas, Mississippi and Oklahoma. Becca was awarded the Waste Management Scholarship in the spring of 2015 and the Veterans Scholarship in the fall of 2015.

After her time at GCC, Becca plans to move on to the University of Rochester or the State University of New York at Buffalo to continue her studies in hopes of becoming a professor or research scientist. She has already been accepted into the SUNY Geneseo Summer Engineering Research program (SURGE) and was named to the GCC President’s List in the fall of 2014 and 2015 and the spring of 2014. Becca is married to Jacob Sheets and has two daughters, Lillyan and Isabella. She is the daughter of Evangeline and Edward Canty and has one sister, Danielle. Becca currently resides in Batavia.

For further information about the NYSMATYC and the Helen Siner Scholarship, visit www.nysmatyc.org.

For the photograph of Rebecca “Becca” Sheets go to: