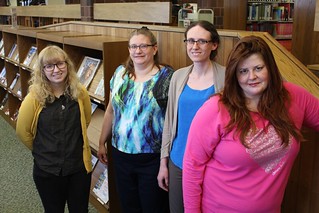 View on Flickr
5 years ago ago by Genesee Community College.

The First Prize-Body of Work winner is Catherine McCabe-Strong. She lives and works in Rochester and is studying in GCC’s Paralegal Studies program. She was drawn to GCC because the courses looked both interesting and challenging. She said, “In my creative writing, I draw inspiration from the Imagist movement started by Ezra Pound in 1912. His three main tenets were to treat the object of the poem directly, to not waste a single word, and to use the musicality of phrases, rather than force meter. These are all things that I take to heart when writing.” She has a novel, Julius Constantine Chang, available through Amazon. And later this month, a very short piece of her prose, “Teatime,” will be published by The Flash Fiction Press on their website, theflashfictionpress.org.  Her poems are “Clementine,” “Clovelly Beach” and “Night.”

Second Prize winner for her poem “Fly” is Amanda Sterzick. She is a self-described late blooming artist. She found her talent late in life and has experimented and self-taught herself in several different mediums. She is a Digital Art major and decided to attend GCC because she wanted to learn how to create art in the digital medium. Her poetry is a physical manifestation of her emotions. She said, “Pain, amusement, anger, joy, rage and sometimes inspiration just take me and I can't do anything else until my poetry OCD is satiated.” She writes a lot of poetry and has several versions of her poem "Fly," noting that the last 3 lines change the most. She is an Honors Program student and plans to graduate with an Honors Diploma after the fall 2016 semester and then continue to pursue her studies. She has artwork that she has created to accompany this poem - a mixed media canvas, and Professor Pam Swarts would like her to include the poem in the digital art show and create a digital composition for the poem. Amanda resides in Batavia.

Third place winner for her poem “Delayed Ambition” is Maureen Moriarty, an Administrative Assistant major at GCC. She has dabbled in poetry most of her life and enjoys going to poetry readings. Maureen resides in Medina.

Honorable Mention honors go to Jennifer Hanson, a student from Arcade, NY. Her poem is entitled “Open Road.” In her spare time, she plays the cello, paints, draws and writes. She comes from a large family and has 2 brothers and 2 sisters. She is attending GCC because it is very cost effective and a good stepping stone and she wasn’t quite sure of her major when she started. She is now a Fine Arts major, and her favorite courses have been painting classes taught by Heather Jones. She writes poetry usually at the end of the day, and prefers to write in a journal and then type out the poem if she wants to share it. She says, “I feel like putting pen to paper is a better artistic process for me than typing.”

Winning poems are posted on the library webpage: http://www.genesee.edu/library/about-the-library/poetry-contests/.

For a photograph of the winners of the 15th Annual Poetry Contest at GCC go to: