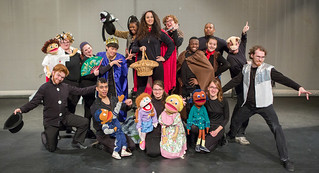 Cast of Little Red Robin Hood
6 years ago ago by Genesee Community College.

Cast of Little Red Robin Hood
6 years ago ago by Genesee Community College.

We’ve all seen fractured fairy tales before, but never quite like this one, which takes a hilarious detour through Robin Hood’s Nottingham and Sherwood Forest!  Leave it to the dream team of Flip Kobler and Cindy Marcus, writers of multiple scripts for Disney, to come up with a fresh, hysterical twist on the characters we may recall from our childhood.

Smart, pretty and kind, Little Red Robin Hood must deal with the Big Bad Sheriff of the Naughty Hams (imagine the Three Little Pigs as The Three Stooges)! They do the bidding of Prince John, the vain emperor who is eager to try on his magical new suit (a la The Emperor's New Clothes), which is being woven by Cinderella’s deceitful stepsisters. Then comes Humpty Dumpty, the Black Sheep, Rose Red and Simple Simon acting as her Merry Men. Little Red Robin Hood must save all the grannies of Sherwood Forest, including her own, an old woman who lives in a shoe – shades of Mother Hubbard and Mother Goose. Along the way, she wins the heart of the Pied Piper — aka Marion — who’s actually a celebrity musician touring with an armload of different Marys as fans.

“The show is a comedy in the genre of mixed up fairy tales with the underlying theme on the power of storytelling,” said Norm Gayford, English professor at GCC, who is overseeing the production. “As a rapid narrative, the Forum players use engaging puppets alongside the numerous familiar characters from our childhood to frame the storyline and give audiences the opportunity to laugh out loud.”

As in year’s past, the Forum Players Children’s Theatre Ensemble are taking their show on the road to entertain audiences across the College’s service area. This year includes a show at the Strong Museum of National Play in Rochester. The performance schedule follows:

“Our children’s theatre program has always been very well received, and this year is no exception,” said Maryanne Arena, director of Fine and Performing Arts at GCC. “We are delighted to bring this performance to audiences of all ages and to theater and locations throughout western New York.”

The complete list of the cast and crew is available here: http://marketing.genesee.edu/images/RedRobinHood2016CastCrew.pdf

For on stage photographs of “Little Red Robin Hood” please go to: