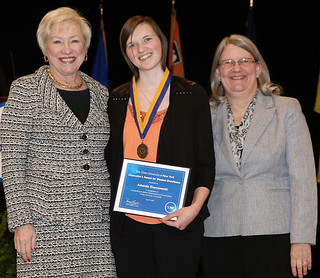 SUNYChancellorAwardee_2016_Amanda_Starczewski
6 years ago ago by Genesee Community College. 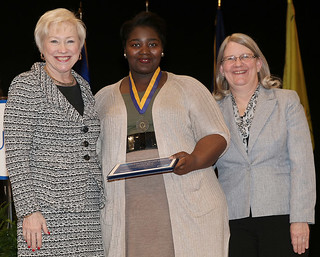 SUNYChancellorAwardee_2016_Jessica_Rush
6 years ago ago by Genesee Community College. 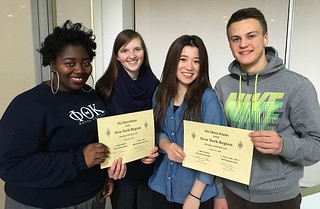 PTKHonorsinActionProject
6 years ago ago by Genesee Community College.

Batavia, NY- Genesee Community College is pleased to announce that two students have been named 2016 recipients of the SUNY Chancellor’s Award for Student Excellence. Jessica Rush and Amanda Starczewski were honored at the awards ceremony in the Empire State Plaza Convention Center in Albany on April 5, 2016. Each recipient received a framed certificate and a medallion, which is traditionally worn at commencement.
The Chancellor’s Award for Student Excellence was created in 1997 to recognize students who have demonstrated the integration of academic excellence with other aspects of their lives, which may include leadership, campus involvement, athletics, career achievement, community service or creative and performing arts. Each year, campus presidents establish a selection committee, which reviews exemplary students. Nominees are then forwarded to the Chancellor’s Office and are subject to a second round of review. Finalists are then recommended to the Chancellor to become recipients of the award.
This year’s honorees from Genesee Community College:
Amanda Starczewski graduated from Pembroke Jr./Sr. High School in 2014 and is a teacher education major at the College with a longing to work with children. Named to the President’s List with a 4.0 GPA for the fall 2014, spring 2015 and fall 2015 semesters, Amanda is an officer and member of the Phi Theta Kappa (PTK) leadership team and recording secretary for Phi Theta Kappa and Alpha Iota Upsilon. She volunteers with the Darien Center Chemical Fire Company and also works at the GCC Child Care Center gaining experience for teacher education. Amanda was awarded the Benjamin Franklin Scholarship in the fall of 2014 and 2015, a scholarship given to students who have families that are volunteer firefighters. She is the daughter of Mark and Jenny and has two brothers, Mark and Steven, and a sister, Julia. Amanda currently resides in Darien.
Jessica Rush came to GCC from Charlotte, SC. She is a fashion merchandising major with a true passion for design. Jessica has made the most out of her time at the College, serving as a resident assistant and orientation leader and actively taking part in Phi Theta Kappa, Toastmasters Club, student government and Diversity Inclusion Club, an organization she founded and currently serves as president. Sheis a 2016 PTK All-New York Academic Award recipient and named Who’s Who in American Colleges and Universities. Jessica also volunteers her time with Habitat for Humanity. Jessica currently resides in Rochester.

“We commend these hardworking students,” GCC President James Sunser, Ed. D. said. “Their achievements are not limited to the classroom, but extend to areas of leadership and innovation which Amanda and Jessica have demonstrated.”
Recipients of Chancellor’s Awards have an overall GPA of 3.8 and records of significant contributions to their campuses and communities.
“This award is our way of saying ‘thank you’ to stand-out SUNY students whose achievements reflect their own impressive hard work as well as the support of their families and friends, and SUNY’s world-class faculty and staff,” SUNY Chancellor Nancy L. Zimpher said. “The 248 students we honor with this year’s award have excelled academically, become role models on campus and established themselves as leaders in the community. Congratulations to all of the students receiving the 2016 Chancellor’s Award for Excellence.”

Amanda and Jessica along with fellow classmates and Phi Theta Kappa members Yu Shimizu (from Japan) and Jorguino Savio (from Timor Leste) were also honored in early March at the PTK Regional Convention in New York City with the Honors in Action Most Distinguished Overall Project, a regional accomplishment that received praise from Chancellor Zimpher.

“Each year, Phi Theta Kappa selects community college students from throughout New York State and the nation who have improved their local community in some way. In doing so, PTK also recognizes the immense value of a community college education and the profound impact that our students have on their campuses, in their communities and on the economy,” Chancellor Zimpher said.

PTK Honors in Action is designed to engage honors students in actions that foster student success and help to recognize and encourage scholarship in a lively exchange of ideas and develop leaders who serve their communities.

The group chose the topic of Quest of Human Expression and submitted a project based on the theme of diversity. Concerns that diversity is not being understood and appreciated led the PTK members to strive for the reduction of problems at GCC caused by people not accepting the issue. Additionally, the team worked to form a comfortable place for students, faculty and staff to communicate and deal with issues pertaining to the diversity.

“Our first leadership decision was to ask a random selection of population attending GCC that consisted of faculty, staff and students, ‘why does diversity divide us?’” the group noted. “It seemed apparent that we needed to make an active decision to develop diversity programs so that we could come together.”

As a result of their efforts, Amanda, Jessica, Yu and Jorguino were instrumental in the implementation of a diversity committee/board at the College, a diversity program through on-campus housing and a Voices of Diversity club on campus. The three measures, while still new and growing, give the students hope that diversity will become less and less of a problem and issues can be dealt with in a constructive way, allowing others to embrace the differences of the people around them.

“We wanted to be sure that diversity did not divide us any longer,” the group said. “It should enrich us.”

Phi Theta Kappa is the international honor society for community college students. Alpha Iota Upsilon (GCC's local chapter) has a rich history as an active chapter and was just recently listed among the Top 100 Chapters internationally. To be inducted into the honor society, a student must have completed 12 semester hours of associate degree course work at GCC with a GPA of a 3.6 on a 4.0 scale and adhere to the school conduct code, while possessing recognized qualities of citizenship. The chapter has nearly 200 current members and over 3,000 alumni. Alpha Iota Upsilon was chartered on February 15, 1985.