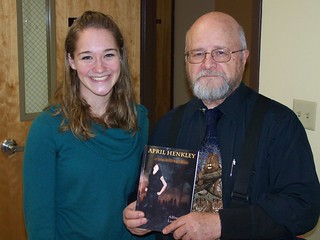 AlisonLudlow_JohnMolyneux
16 years ago ago by Genesee Community College. 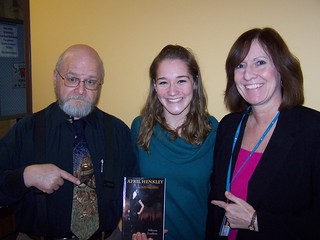 AlisonLudlow_JohnM_PattyChaya
16 years ago ago by Genesee Community College.

Batavia, NY- Allison Ludlow once dreamt that she was kidnapped from her home and forced to live in an underground prison. The dream became an inspiration for the GCC Accelerated College Enrollment (ACE) student to conceptualize a novel series that she recently added to with her second book in The Rebellion Series collection.

The Rebellion Series takes place in a fictional world where a war is taking place between the Justices and the Rebels. The first book follows main character, Shakia Napel, throughout her captivity in an underground prison during her time in the Rebel Army (RA), similar to Ludlow’s dream.

“The second book takes place after the first book, and is written by the perspective of April Henkley, who was introduced in book one,” said Ludlow of her recently-published addition to the series, April Henkley: A Tale With Two Ends. “The Rebellion Series centers on how individuals are affected by this war, and the new book includes some in-depth undercover operations,” Ludlow said. “Each book contains intrigue, drama, action, murder, and of course, love.”

Allison is currently enrolled in GCC’s ACE program and is completing her high school education through Genesee Valley Home Educators. She anticipates graduating in June of 2017 and plans to transfer to the State University of New York at Geneseo to complete a two-plus-two program in accounting and earn a master’s degree.

“My experience at GCC has been nothing short of spectacular,” Ludlow said of her time so far at the College. “Every teacher has been exceedingly kind and understanding, and the staff has been incredibly helpful, always surpassing expectation. My favorite class, by far, has been Public Speaking 108 with John R. Molyneux. At the beginning of the semester, I was terrified, but by the second class it felt like we'd all known each other for years. The first time I walked into his classroom, he said, "Welcome to Fun 101." He wasn't joking. We never knew if he would bring breakfast for the whole class, or if we'd been drawing random topics for improvised speeches. He taught us well, as I believe we all learned the art that is eloquent speech.”

Ludlow comes from a long line of GCC students in her family, following in the footsteps of older siblings Sarah, Heather, Caleb, Emily, Stephanie and Catherine, who all attended GCC in some form or another. Sarah graduated from the nursing program in 2005 and completed her bachelor’s degree at the University of Rochester before obtaining her master’s at the University of Philadelphia. Stephanie completed the first two years of her accounting degree at the College and is now completing the two-plus-two program at SUNY Geneseo where she plans to graduate in May, 2017. Heather, Caleb and Emily were all part of the Rising Seniors Program and Catherine was recently accepted into the GCC nursing program for the fall semester.

“I chose GCC for their exceptional ACE Scholarship Program and my experience has given me a great start for my future,” Ludlow said. “In five years, I hope to be working in accounting with my CPA.”

As for the future of The Rebellion Series, Allison plans to add to the collection with more books. “As of right now, the plan for future books contains four more within the series, though that number could change,” Ludlow explained. “It takes time to write each book, but I hope to finish the next one before 2018.”

For more details on The Rebellion Series, you can visit the collection’s official Facebook page: https://www.facebook.com/therebellionseries/

To purchase Allison’s latest installment to the collection, visit: http://www.amazon.com/April-Henkley-Tale-Ends-Rebellion/dp/1492958263/re...