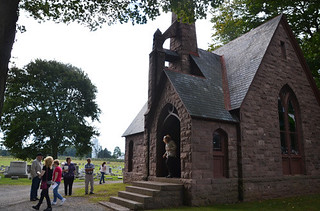 chapel-at-hillside-cemetery
8 years ago ago by Genesee Community College.

Batavia, NY- The GCC History Club in conjunction with the Clarendon Historical Society will host its second-ever “Ghost Walk” at the Hillside Cemetery in Holley, NY planned for Saturday, April 30, 2016, with several showings beginning at 4 p.m.

A rector of St. John’s Episcopal Church in Holley, Rev. Benjamin Franklin Miller rose to the rank of Major (brevet) with the 151st New York Volunteer Infantry during the Civil War. After the war, Rev. Miller was active in the Grand Army of the Republic, the Royal Arch Masons and the Maccabees.

Col. Nicholas E. Darrow was a Jackson Democrat who became a founding member of the Republican Party in the 1850’s. He would serve as Clarendon Town supervisor, postmaster, and superintendent of the Erie Canal from Holley to Pendleton, and a member of the New York State Assembly. He served four years as colonel of the 25th New York Artillery in the state militia. Before he died in 1896, Darrow was the last surviving charter member of the Holley Masonic Lodge.

Rev. Miller and Col. Darrow are two of the many interesting folks that people will encounter at the Hillside Cemetery outside the Village of Holley on April 30 when the Clarendon Historical Society and the GCC History Club sponsor their second Ghost Walk at the historic cemetery. Admission is $10 per person and all proceeds benefit the Chapel Restoration Fund. All tours begin at the chapel with two showings beginning at 4 p.m. and 7 p.m.

Designed by Rochester architect Addison Forbes, the Medina sandstone chapel was built in the Gothic Revival style in 1894. But time has taken its toll on the chapel and significant steps need to be taken to preserve it. Last October, GCC students and faculty served as “ghosts” for the first-ever “Ghost Walk” at the Hillside Cemetery. With over one hundred visitors, the event was a great success paving the way for future performances and further support for the worthy cause. Among those featured the first time were Civil War veterans, a boxer turned temperance lecturer and survivors of the Titanic disaster.

Questions about the Ghost Walk can be directed to Derek Maxfield at ddmaxfield@genesee.edu or Erin Anheier at erinanheier@aol.com.